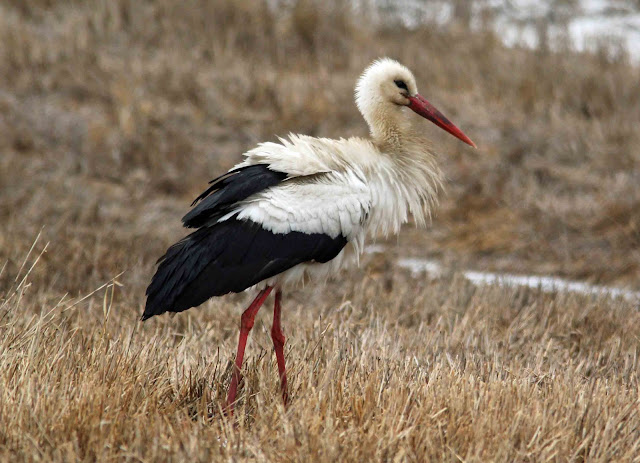 A Norwegian tick was on the cards today. A Stork has turned up at a rubbish dump near Hamar in Hedmark and Rune and I set course there this morning. What is most likely the same bird overwintered at the same tip in 2008/09 and featured in the national news and was nicknamed Sture. We left early with a two drive ahead of us and also a desire to check out Starene which is a fantastic wetland where a farmer purposely floods some fields each spring creating a haven for migrating waterfowl. We checked out Starene first as we knew that yesterday the Stork hadn't turned up until late morning. The flooded fields were alive with Teal (krikkand), Wigeon (brunakke) and Pink-footed Geese (kortnebbgås) amongst others with the highlight being an early Greenshank (gluttsnipe). The air was filled with the sounds of calling ducks, geese and swans and was a great way to begin the day (usually at this time I would have been having a shower and maybe doing a bad Elvis impression.

Arriving at the rubbish dump the employees knew exactly what we were looking for (a Stork is perhaps one of the few bird species nobody could avoid noticing and it was the employees who informed both birds and thepress that the bird was back on Wednesday) and gave us very exact directions for which part of the tip it was frequenting. And there it was by the impregnated wood section standing on some rubbish and looking not particularly majestic. Yesterday it was seen eating a rat and its dirty plumage made it a bit difficult to see why this species has historically been associated with childbirth.

For a bird that has chosen to hang out at a busy rubbish dump it seemed wary and flew off low over some trees. We waited half an hour which I used to look at the many gulls on the tip with the highlight being a yellow-legged Herring Gull (gråmåke). Half an hour at a rubbish dump should be enough for any sane birder (although gull freaks can easily spend weeks on end knee deep in rubbish) so we headed off. A look at the map showed that it might be possible to relocate the Stork although would require 10km of driving to come to a point less than 1 km away. Thanks to Rune's patience and map reading skills we checked out a few minor roads before driving up a farm track which brought us out by a flooded field and would you believe it?! There was Sture in natural habitat. Now it has to be said Sture did not look so happy in the cold with snow still on the ground but he was actively looking for food - maybe he was hoping to wash down yesterday’s rat with a nice frog or toad?
Many pictures and video were taken over the next 45 minutes. You will notice that the video has no sound. This is because you would hear Rune and Egil Ween talking about far too many boring (or maybe too interesting?) things. I could have added a soft music soundtrack but that would have been a bit too cheesy!


Setting course for Oslo we stopped again at Starene where in the course of 4 hours there had been a huge increase in Teal numbers from 100 at 0715 to 260 - isn't migration great?!

We then had time to bird the Glomma south of Årnes and the valley at Bjørkelangen. What a difference 3 days make. The whole valley is now flooded and there were far fewer birds to see. The promising area at Kjelle was now full of muddy water and the flock of 190 Teal was replaced with 10 Goldeneye (kvinand). Most of the Whooper Swans (sangsvane) have also moved on as have many of the Cranes (trane) although these have probably just moved into the local forests where they breed. Once the flood waters have receded though this area should be excellent with a good potential for waders.

It was truly amazing to see the difference in birdlife today. This is what makes birding at this time of the year so exciting as things can change so rapidly from one day to the next. Let those good times keep rolling :-))