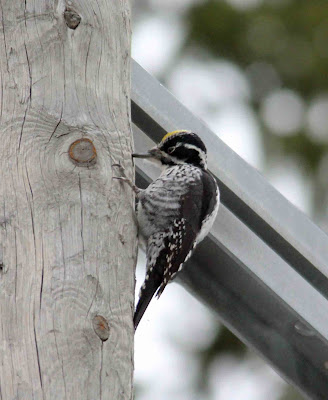 I had agreed to meet up with Per Buertange in Maridalen at 9am today to see if there would be any migration to watch. When he rang me at 0730 (as I was just getting out of the shower) to say he was listening to a drumming Three-toed Woodpecker then I had an extra incentive to get the girls ready and deliver them to school and kindergarten early. As regular readers of this blog will know, Three-toed Woodpecker has never been an easy bird for me. It is also one I have never seen in Maridalen or the surrounding forests despite numerous visits at all times of the year.

I joined Per where he had heard the bird but it was quiet now. We then tried a couple of other places and the second place, 800m from where Per had the bird, has some nice old and rotting trees, woodpecker holes and trees with the bark ripped off. I have always fancied this as a Three-toed location but have only seen Black Woodpecker here before. We played the drumming of Three-toed but with no response. We did hear distant Green and Black Woodpeckers and see evidence that Beavers have woken up and are active but no 3 toe. As we arrived back at the cars a woodpecker drummed in a spruce right by us. It took a while to see the bird but sure enough it was a male Three-toed! We were then treated to it drumming on a telegraph pole! We got to see it well and also see it feeding. I played the call of a drumming 3 toe to it and it took a couple of minutes before it responded. According to Per this points towards the bird still being on its winter territory rather than a bird in breeding modus. We will see though, as this would be a great location to have a breeding pair.

I must admit to still not being entirely confident at telling the woodpeckers apart just based on drumming and when they choose an artificial sound board then they sound different. Now is the time though to get out and hear woodpeckers. When we stopped at Nes afterwards to check for viz mig we had three drumming Great Spotted Woodpeckers and two singing Green Woodpeckers (with one probably also heard drumming). Four species of Woodpecker within half an hour of each other in Maridalen – trying beating that!!
Viz mig was not really happening at Nes. There were a few Chaffinches going through and a single Skylark plus my first Oslo Lapwing of the year. I couldn’t stay long and as I drove home Per texted me to say there was a Buzzard circling and sure enough I was able to stop the car and see it – another Oslo year tick.

I am off now to Jæren for the NSKF spring meeting and we will hopefully  have time for some good birding.

I will post a few pictures now and later on will post video of the bird including a comparison with Lesser and Great Spotted (as much for my own benefit to help me remember the different drumming sounds they make). 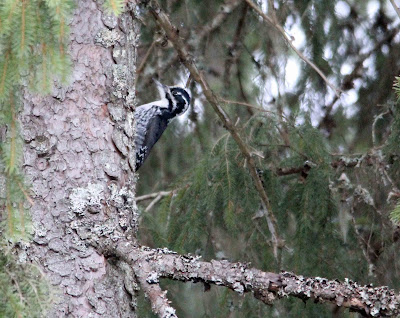 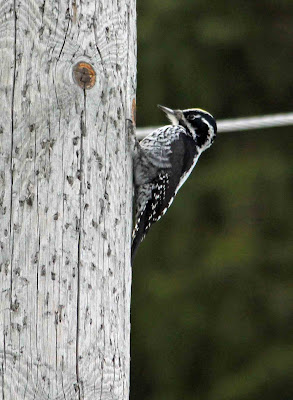