NSKF meeting and an almost rarity

This weekend has been taken up with the spring NSKF (Norwegian Rarities Committee) meeting in Jæren – Norway’s premier birding area. Unfortunately spring has not yet come to Jæren either so there was hardly any migration to witness although on Sunday there was a little more life. As it is Jæren there are always birds to see though and the year ticks flooded in but there were no flocks of thrushes, no white wagtails and most of the ducks were over-wintering birds.

There was one real highlight though when I found a Green-winged Teal (amerikakrikkand) – a true rarity. I was with Tor Auden Olsen at Grudavatnet and we were pleased with a couple of Ruff (brushane) which were the first recorded in Norway this year and had both of us had looked through a flock of Teal (krikkand) a couple of times without finding anything more exciting. I was mentioning that Green winged Teal was perhaps our best chance of a rarity when on my third look through the flock I found one. I had to repeat myself a couple of times before Tor understood that I had actually found one, live in the flesh! It was at quite a distance and even though we were able to come closer on the other side of the lake it was always at least 300m from us. Never-the-less I managed some pictures – important to provide evidence convince our fellow NSKF members that we had seen it ;-) Or it would have been if the species was still a national rarity – I had forgotten that it had been degraded a year ago!
Compared to the Oslo area the number of water birds cannot be compared. On the sea at Revtangen we had 8+ Great Northern Divers (islom), 300+ Common Scoter (svartand), 50+ Long-tailed Ducks (havelle), a 1st winter Glaucous Gull (polarmåke) heading north, and my first Ringed Plover (sandlo) and Purple Sandpipers (fjæreplytt) of the year. On Orrevatnet and the other lakes there were 1000’s of Greylag Geese (grågås) with a scattering of White-fronted (tundragås), Pink-footed (kortnebbgås),  Canada (kandadgås) and a single Bar-headed Goose (stripegås) amongst them. There were also hundreds of Wigeon (brunnakke) with smaller numbers of Teal and Mallard (stokkand) and with a pair of Gadwall (snadderand) and single male Shoveler (skjeand) and Pintail (stjertand) amongst them. Diving ducks were far less numerous with 100+ Tufted Ducks (toppand), 15 Scaup (bergand) and four Smew (lappfiskand) including a superb male and a male Pochard (taffeland) amongst them.

The only new passerine I had for the year was a single Meadow Pipit (heipiplerke) and there were no flocks of finches or buntings to be seen. Raptors were very scarce with just single White-tailed Eagle (havørn), Peregrine (vandrefalk) and Merlin (dvergfalk), 2 Goshawks (hønsehauk) and 2 Marsh Harriers (sivhauk). On Sunday though there was some sign of passage with a couple of Sparrowhawks (spurvehauk), and single Common (musvåk) and Rough-legged Buzzard (fjelllvåk) heading north.
Many of the birds were seen from the Kjell Mjølsnes’s house (host for the meeting) which must surely be the best birding house in Norway looking out over the particularly productive Ergevatnet.

One highlight was seeing a Woodcock (rugde) standing under a bush from the kitchen window – possibly the first time I have seen one on the ground in daylight! 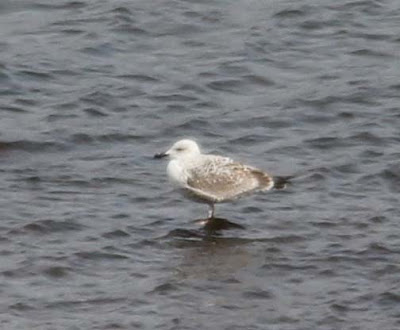