Today was a gentle days birding around Oslo with chores needing to be taken of. A morning trip up into Maridalen revealed very thick fog. However there were many hundreds of birds especially thrushes. Once again I had all six thrush species including a flock of 6 Ring Ouzels (ringtrost). Many birds were feeding close to the road which gave some good views although the mist was always a problem.

After finishing my chores I headed for Fornebu where I reckoned there would be no fog. I was right but there was a very strong southerly wind. As I was getting out of the car at became aware of calling Ring Ouzels in the bushes close by and one perched nicely. I approached to take a photo and it then flew down onto the path together with another bird and I was quite happy with the pictures I was able to take at around 20metres range as this is normally a shy bird. Then one of the birds started running towards me. It kept coming and coming and at less than 10metres range it tossed something off the ground. It had obviously seen some food but at the time I thought it was actually a piece of rubber – whatever it was the bird just tossed it and seemed to lose interest. Looking at the pictures I see it was a newt! Quite a mouthful I would think and probably too large to swallow. Great pictures resulted.

After this I bumped into a couple of other birders and was told that the Garganey (knekkand) were in Storøykilen. I walked down to look for them, couldn’t see them but then suddenly a male Marsh Harrier (sivhauk) flew up out of the reeds and began hunting at only around 50metres range. Unfortunately there was a wire fence between me and the bird and this and incorrect camera settings meant that the pictures were not quite as good as those of the ouzel. This bird had been reported at 8am but it was now noon so was clearly settled for the day at least. Yesterday a female Marsh Harrier had been seen flying through and also a male Hen Harrier that as if by magic metamorphosised into Pallid Harrier six hours later! Clearly Fornebu is the place for harriers at the moment. 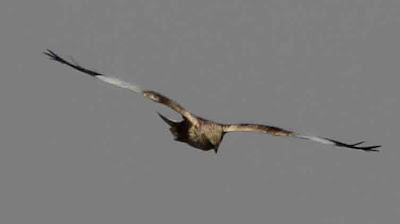 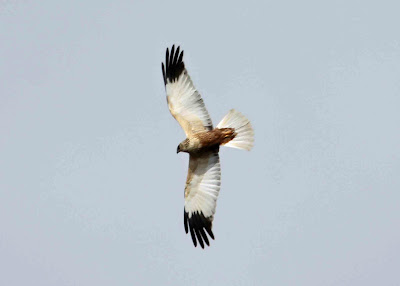 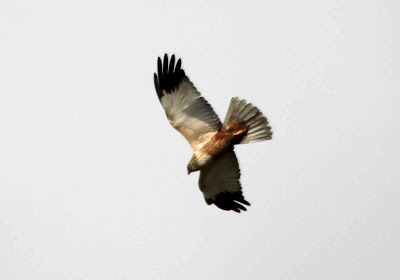 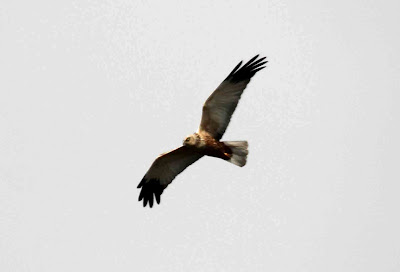 After enjoying the Harrier (and I saw it again later) I located the Garganey pair (I don’t know what had happened to the female yesterday) which were with 21 Teal (krikkand). The birds were at a bit more range than yesterday but it was nice to see the female which is subtly different than the similarly sized Teal.

With the strong wind there was little to see generally at Fornebu but I did have one very special sighting. Long-eared Owls (hornugle) breed annually at Fornebu although are rarely reported and I have never seen them. In fact I think I have only seen this species three times in my life (twice at roosts in England and once in the headlights in Norway) although have heard it more often especially the sound of begging young on June nights. I finally found out where the birds are and I have walked past this small group of trees many times. It was a lot of white droppings down the trunk of the tree that gave away the location and one bird flew out before I knew what was happening. I located another bird still in the tree and from a respectable distance was able to get some pictures. A nearby tree held an old crows nest and I guess this will be where they nest. 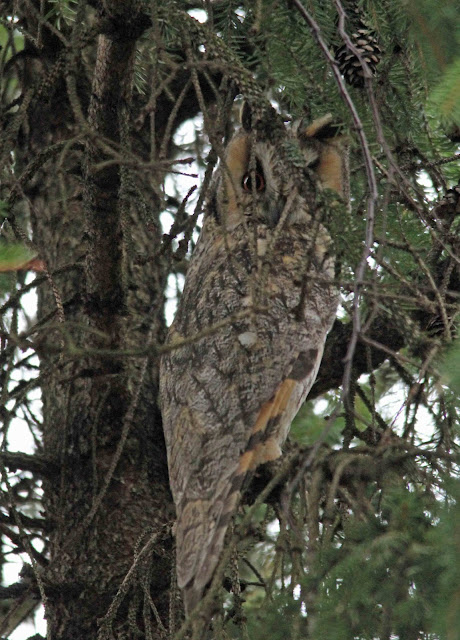 With the wind so strong I gave Rolfstangen half an hour but had no seabirds for my troubles.

Feeling very happy and excited to look through the 300+ pictures I had taken I visited Maridalen again. The wind had blown away the fog but it was cold and felt more like late autumn. I spent half an hour around the church ruins at Kirkeby (always one of the best spots in the spring) and here there were also all six species of thrush with 8 Ring Ouzels in total. Most surprisingly a Woodcock (rugde) and Snipe (enkeltbekkasin) flew out of a stubble field and another 3 Snipe flew over. Close by a female Kestrel was perched on wires and also hovered low over a field.