The signals my body is sending could not be ignored so what better way to try to get in shape than birding by bike in Maridalen. It was a cold but sunny day and I headed first up Akerselva. There is still lots of ice even on the river but life is returning. Chaffinches (bokfink), Robins (rødstrupe) and a Starling (stær) were singing and the Dippers (fossekall) were active. At one site I had 4 together calling and chasing each other. It wasn't clear whether there were two pairs fighting over territory or possibly three males vying for territory and a female. A pair of Whooper Swans (sangsvane) has been on the river for over a week now. They are almost certainly the pair that breeds in Maridalen and are waiting for the ice to melt. It was strange to see them on this small river with buildings all around. They flew around calling briefly which required some acrobatics to avoid trees. A young Mute Swan (knoppsvane) was also here and was in the news yesterday after the fire brigade were called in to catch it to remove a fishing lure hooked in its bill. This bird looks in poor shape with a very thin neck. It is most likely the same bird I had at Maridalsvannet at the end of February and it has apparently been on the river here for a few weeks. After taking photos of the swans, Dippers and Goldeneyes (kvinand) I continued up to Maridalen. 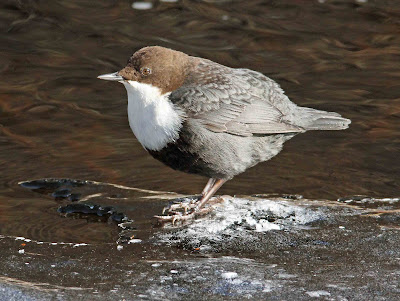 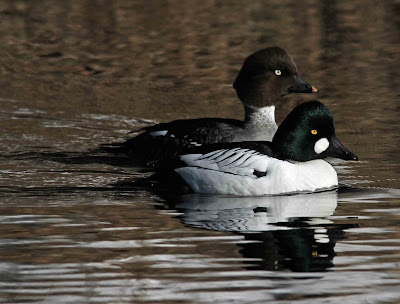 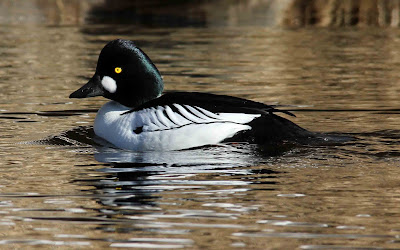 When I made it into Maridalen my strategy was to sit in the sun observing viz mig from the church ruins and then go searching for drumming woodpeckers. My strategy was a failure though this time (and I have always been praised for my strategic thinking skills). Viz mig just wasn't happening and by the time I went searching for woodies it was too late in the day.

Whilst sitting at the ruins though I did have a very enjoyable woodpecker experience. A Green Woodpecker (grønnspett) was singing close by and I soon realised there were two birds. They were perched by the road when a cyclist passed very close without scaring them. I decided to go closer. They then flew into a small spruce tree and perched on branches low down. I was then able to watch what I believed to be courting. However when I reviewed the video I saw that it was two males so this actually antagnostic behaviour related to marking territory. They were mostly quiet but fought by bobbing their heads and approaching each other and waving their beaks and perhaps even hitting clashing bills. It went on for a while and culminated in them falling to the ground squabbling before flying off in separate directions (BWP describes antagonistic behaviour exactly as I saw it).

I did hear a couple of drumming woodpeckers but these heard like classic Great Spots (flaggspettChaffinch are getting more numerous now and three Skylarks (sanglerke) were singing over fields covered in 20cm of snow. Single Goshawk (hønsehauk) and Sparrowhawk (spurvehauk) gave the impression of being local birds. New birds for me were a single male Reed Bunting (sivspurv), a singing Hawfinch (kjernebiter) and a couple of Long-tailed Tits (stjertmeis).

According to the weather forecast the winds will turn southerly and nightime frosts will end from Sunday. I predict a veritable avalanche of birds next week - there will be so many that you won't know which direction to look in - your senses will be overwhelmed....

Finally, here are the videos from my recent woodpecker encounters.

First: todays Green Woodpeckers fighting. Both birds are males due to them having red malar stripes (below the cheek) whereas the female has a black stripe.

Third: a comparison of the drumming of Great Spotted, Lesser Spotted and Three-toed Woodpeckers. I have no footage of Green to add to this, indeed I cannot remember ever having seen Green drumming and the literature describes them drumming as being a rare occurance and the drumming only being audible over short distances.