I know I’ve said it before but WHAT A DAY!

Another turbo charged session with Rune with quality birds. Rune had to be back for just after lunch so we started at 5am with a plan of going to Østfold to find Dotterels (boltit) and anything else that might be around Kurefjorden. We discussed changing our plans and heading west to Mølen where a good selection of waders including Pectoral Sandpiper (alaskasnipe) were seen yesterday but decided to stick to our plan with a small (actually large) detour via Hellesjøvannet where a Spotted Crake (myrrikse) had been heard yesterday.

We checked out the fields around Haneborg hoping to find Dotterel here (they are very rare in Akershus but this has been a favoured area) but had to settle for a handful of Golden Plover (heilo). The flooded fields at Kjelle looked fantastic for waders but there were only a few Wood Sandpipers (grønnstilk), a single Greenshank (gluttsnipe) and only 11 remaining Teal (krikkand).

Hellesjøvannet however was good value. Three Marsh Harriers (sivhauk) showed themselves, a male Pochard (taffeland) was on the water and a good number of hirundines were hawking insects. I soon saw a Red-rumped Swallow (amursvale) candidate but it didn’t feel quite right and was always at distance and difficult to see. We moved closer and finally got to see it better. It wasn’t a Red-rumped Swallow but something probably equally as a rare: a hybrid Barn Swallow (låvesvale) x House Martin (taksvale). Its jizz could remined you one minute of Swallow and the next of House Martin. Plumage wise it resembled most a House Martin but the rump was grey and the throat was also dusky. The tail streamers were also longer than on House Martin but not as long as on Swallow. Unfortunately I wasn’t able to get any pictures of this rarely documented hybrid.

Whilst I was concentrating on the hybrid Rune set about finding real birds and soon had the Spotted Crake singing. It was singing very cautiously only about 20m from us but the cold (it was only 3C) was probably preventing it from really getting going. Also here Reed Warblers (rørsanger), Bluethroat (blåstrupe) and Whinchat (buskskvett).

Hemnesjøen gave us a singing Wryneck (vendehals), a couple hundred feeding Swallows and House Martins and a mixed nesting colony of Black-headed Gulls (hettemåke) and Great Crested Grebes (toppdykker).
We then had a long drive down to Kurefjorden and first checked out a couple of likely fields for Dotterel with no joy. Rosnesbukta greeted us with near perfect conditions in terms of light (no sunshine) and water level (incoming tide). Here we had a small flock of Ringed Plover (sandlo) and Dunlin (myrsnipe) which eventually took off and headed north, four Bar-tailed Godwits (lappspove), a pair of Pintail (stjertand), a pair of Gadwall (snadderand), a female Marsh Harrier (sivhauk) and a heard only Temminck’s Stint amongst others. In other words quite a good turnout!

With time running short and more Dotterel places to check we headed for Viersholm, a traditional area for Dotterel and also a good place for raptors. I set about scanning the ploughed fields for Dotterel when after a few minutes I picked up a ringtail harrier. I immediately felt it was no Hen Harrier as it seemed slim and long winged and generally pale in colour. I was also, in the scope, only able to make out 4 fingers. It lacked redness to the underparts so was not a 2k bird but rather an adult which makes it more difficult to separate Montagu’s (enghauk) and Pallid (steppehauk). However it did have distinct dark and pale banding on the underwings and a relatively plain face so was surely a Monties!! The next job was to take pictures to confirm and document the ID. It was at this stage a good 500m away but was heading towards a road. We jumped in the car and raced closer and it crossed the road about 200m ahead of us. It then proceeded to hunt only about 150m away and I fired off loads of pictures only to discover that it wasn’t in focus in any. It then flew over the road where we had been when we first saw it. We then rushed back in that direction and were able to watch it at about 300metres range. I switched to manual focus and got some pictures that can be used to document and confirm the observation but were no way near as good as the other ones should have been. It stayed hunting in the area for over half an hour and was still there when we left.
Here are some pictures, and oh by the way we also found a flock of six Dotterel after we had calmed down! 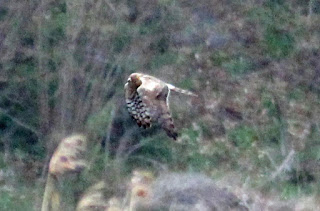 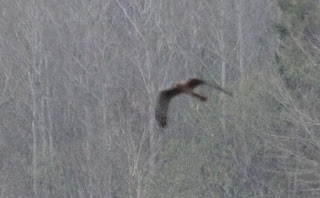 And pictures of today's target bird. All a bit blurry - I was probably still unsteady after the excitement of the harrier.

We sneaked in a lightening quick visit to Ovenbukta and had 5 Temminck’s Stints here as the best birds.

I visited Maridalen in the afternoon where a small concentration of 5 Whinchats and 6 Wheatears feeding in close proximity was the highlight.