Something good and not quite something cosmic

Today started without a hint of wind in the air. It was overcast and cold and with a threat of rain but the lack of wind made it pleasant – it also felt like there would be birds to be seen.

I had decided that I would go to Svellet again today as the weather would make for much better viewing conditions than I had yesterday (when there is sun the heat haze makes it very difficult scanning the vast mudflats). Something told me to visit Maridalen first though....

There were no new (or old) ducks on the water at Hammeren (the lake is still 95% frozen) but the pair of Black-throated Divers were there. So, no influx of diving ducks but perhaps not surprising with so little open water. I stopped at the church ruins to check the fields and also the bay here. On the ice were a lot of gulls but I could find nothing unusual (this time last year the Med Gull turned up on the ice). The fields of burnt stubble still held a lot of birds though with at least 7 Ring Ouzels (ringtrost) which are unusual here in May, 2 Twite (bergirisk) with the male having a particularly pink rump and a resting Golden Plover (heilo) amongst the commoner birds. As I walked along the path a lark flew up and circled over me. It didn’t call and against the sky I couldn’t noticed any plumage characters but it felt good. It landed behind a ridge in the field and I was able to approach closer. It then popped its black and yellow head up to confirm a Shore Lark (fjellerke)!

Although this bird has its European breeding stronghold in Norway it is a great rarity in and around Oslo so this was a patch and county tick for me. It stayed loyal to the same small field and was seen by several others during the day. 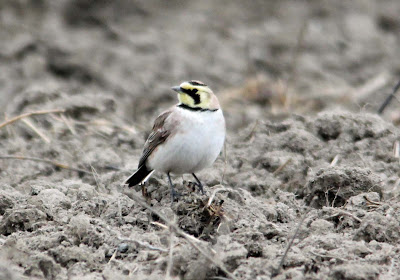 In the beginning of May I would expect a field like this to be holding real heralds of spring such as Yellow Wagtails (gulerle) and Whinchats (buskskvett). It is a real sign of the late spring therefore that it is birds such as Ring Ouzel, Twite, Golden Plover and Shore Lark that are here – one could almost believe one was in the mountains in July!

Feeling torn as to whether to continue searching in Maridalen or go to Svellet I decided on the later although had to stop the car twice on the way out of Maridalen as two flocks of Pink-footed Geese (kortnebbgås) headed north. By the time I got to Svellet a southerly wind had started to pick up and with a lack of suitable clothes I started to feel bitterly cold and this could be the cause of my subsequent delusions.....

Wader numbers had noticeably increased from yesterday and there were now at least 60 Greenshank (gluttsnipe) plus 4 Wood Sandpipers (grønnstilk). Also on the mud a male Yellow Wagtail of the Scandinavian race thunbergi and my first Sand Martin (sandsvale) of the year was hunting for (non exsistent) insects.

Whilst going through the waders hoping to pick out something rarer I found a smaller, pale wader with a distant group of Greenshanks wading in the water.

I really wasn’t sure what it was and made my way laboriously towards it through the oozing mud. It looked very exciting and my thoughts started drifting towards its being a Stilt Sandpiper (sytlesnipe). It appeared long billed and long necked with a prominent supercilium and the way it was wading with the Greenshank started getting me convinced this is what it was. Still I wasn’t quite sure which luckily stopped me from sending out any foolish messages!
I saw it in flight and the wing bar and grey rump didn’t add up but I still didn't know what I was looking at.
It then landed beside the Wood Sandpipers and was noticeably bigger. This wasn’t right for Stilt Sand but what was it then? Per Buertange then called me and I was able to get him to go through a bird book quoting measurements to me. It was only then that things started to fall into place and the wing and rump/tail pattern made sense. It was a Knot! But why wasn’t it red, what was it doing with Greenshank and wasn’t that bill too long?

It must be a 2cy bird moulting into 1st summer plumage which explains the lack of red in the plumage and the otherwise pale faded feathers but I still cannot quite get the bill and neck to fit with Knot but that flight shot doesn’t leave any doubt. Also I understand that the most birds in their first year usually stay in winter quarters and do not migrate north. Just one of those birds I guess.

Tonight and tomorrow there is forecast continued strong southerly winds and rain which should cause a good fall of waders plus others. Where to go?
Lagt inn av rixy kl. 17:06