4 am wake up – it could only be seawatching at Brentetangen. With it finally being warm and a gentle southerly blowing I thought that today would see a big movement of divers, terns and skuas. My notebook shows I started watching at 0535 and straightaway I had a flock of 5 commic Terns heading north. It looked like my hopes were going to come true..... Well not quite. It was slow going actually but the fact that it was relatively warm made the four hour stint I put in enjoyable. There were Common Terns (Makrellterne) visible nearly all the time and they were often calling which is a true sound of summer. Migrating Tree Pipits (trepiplerke) were also a regular sound as they passed overhead and there were regular migrating Redpolls (gråsisik) heading west over the fjord and also singing around where I was sat. In this part of Norway you would expect singing Redpolls at this time of year to be Lesser (brunsisik) but these were definitely their Common cousin. They were mostly flying around and I hadn’t managed to see one properly when I remembered that I had been told by an American that pishing brings them down and sure enough it did!

Back to the sea. There were a few Kittiwakes (krykkje) going both ways and three Gannets feeding and flying about but nearly no movement of ducks or divers. I did have a single Bean Goose (sædgås) heading north which was unexpected and a single flock of 11 Whimbrel (småspove) but again it was the land that provided more entertainment with singing Blackcap (munk), Lesser Whitethroat (møller) and Wood Warbler (bøksanger). Getting close to 9am I knew that this was prime skua time and I needed one to save the day. Sure enough at 0843 I picked up a skua going south. It quickly showed itself to be a light phase Pomarine (polarjo) so after over 3 hours I had finally seen todays target. Whilst following it I saw the days second best bird which was an adult Little Gull (dvergmåke) heading north.  I hung in there until 0935 to complete a round four hours but no more skuas were to be seen.

My next destination was Kurefjorden and the fields around where I hoped to turn up a Dotterel (boltit). No success on that score and Kurefjoden was quite with just five Bar-tailed Godwits (lappspove) and a pair of Gadwall (snadderand) to liven things up.

Whilst searching for Dotterel I did find some Golden (heilo) and Ringed Plovers (sandlo) and whilst watching these and scanning the area we picked up an adult White-tailed Eagle (havørn), two Hobbies (lerkefalk) and two Ospreys (fisekørn).

It was only midday but I decided to head for home and give Maridalen some time. In Nesbukta there were some hirundines feeding including two Sand Martins (sandsvale) and I heard a Wryneck calling 500 metres from last year nesting site (and where the birds have been showing). When I later checked out the regular site I didn’t see or hear any Wrynecks so assumed that the birds have maybe moved (I have read that they can take a couple of weeks to decide on which hole they will breed in). However, when I later walked back under the nesting tree I saw a familiar head poking out of the hole.

It looks therefore that they will nest in the same hole as last year. I will have to find out whether there is another territory 500m away or whether this could just have been one of the pair marking out their territory. Also a single Redstart (rødstjert) and my first Pied Flycatcher of the year which showed incredibly well and came so close that I couldn’t photograph it. 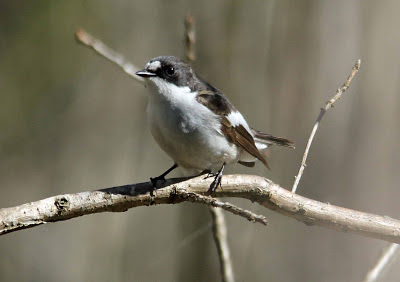 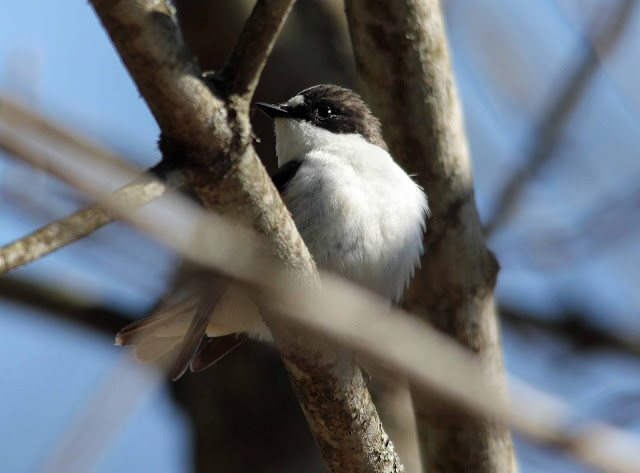