This morning I awoke before my alarm call and was at Svellet just after 5:30am. It was a windless morning and an overnight frost had left a layer of ice on the puddles on the mudflats. The water is still receding and there are now huge areas of mud available to the waders. Being such a vast location it was not easy to see all the waders but I estimated 400 Greenshank (gluttsnipe) and they have yet to reach their peak. No Wood Sandpipers (grønnstilk) but a Whimbrel (småspove) with some Curlew (storspove) and a single Ringed Plover (sandlo) were new. No raptors or ducks here.
I also dropped in at Snekkervika where there were 330 Teal (krikkand) and 54 Greenshank but nothing unusual and no warblers or chats to liven things up. 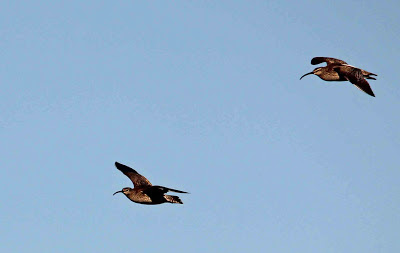 It was only just after 7am and I was keen to give Maridalen a half decent go before breakfast so made my way there. The frost had resulted in the edges freezing over again but it was a lovely sunny morning with a good feel to it. The fields by the church ruins which have held so many birds the past days were now very quiet with just 3 Ring Ouzels (ringtrost) and 10 Meadow Pipits (heipiplerke) left although Twite (bergirisk) have increased to 6 and best of all two Whimbrel were feeding on the fields with a Redstart (rødstjert) in the same bushes as yesterday and a Wood Sandpiper (grønnstilk) in the bay.

The Wryneck (vendehals) has now become a pair and both were singing and engaging in courtship. Whilst watching them courting with one bird (the female?) swaying whilst the other sang, a male Lesser Spotted Woodpecker (dvergspett) flew in and landed on the same branch. Somehow I only managed a couple of very poor pictures of them together - I think I forgot to press the button as I was watching in amazement. Later the woodpecker started singing at the same time as (in response to?) the Wrynecks. Hearing them singing together confirmed just how similar their songs are. The songs of the male and female Wryneck differ slightly and the Lesser Spot was very similar to the male Wryneck. I also think that the Lesser Spot got a bit confused...
When I got home I could hear the local Lesser Spot drumming and a male Brambling (bjørkefink) was in the garden. I did really need a coffee by now but what a way to start the day!

And the day continued in a good style. A family walk up to Dausjøen in Maridalen was also successful on the nature front. We saw frog spawn in the usual pond (not there a couple of days ago), our first Peacock (dagpåfugløye) and Brimstone (sitronsommerfugl) butterflies of the year plus a Small Tortoiseshell (neslesommerfugl). We also had a fox walking bold as you like over the ice at Dausjøen (thereby confirming that is must still be fairly thick). As it walked over the ice we could see in the background on the open water a pair of Black-throated Divers (storlom) and a single Whooper Swan (sangsvane) whose mate was already sitting on the nest. The young Whooper Swans disappeared a couple of years ago and it could well have been a fox that took them. Hopefully the adults will have learnt from their previous experiences. 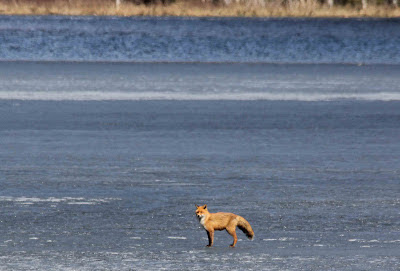 Back by Maridalsvannet I saw the male Lesser Spotted Woodpecker who was also singing and drumming, one of the Wrynecks and also my first Common Lizard of the year. 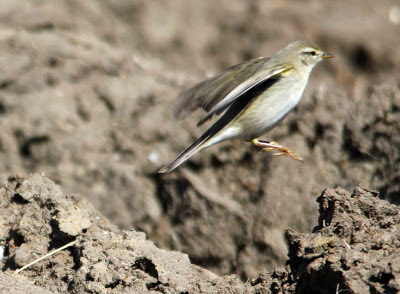 In the garden I decided to check the nest boxes. After a lot of confrontations earlier in the spring it looked like the Great Tits (kjøttmeis) had seen off the Blue Tits (blåmeis) and I have seen them inspecting both nest boxes although not seen them with nesting material, I have however noticed Blue Tits carrying nesting material in the garden although destination unknown. I checked the camera nest box first and was surprised to see a new but unoccupied nest here. I then checked the other box and was even more surprised to see a Great Tit sitting on a nest and she didn’t budge whilst I looked. I’ve no idea who has built the nest in the camera nest box but the camera is now in operation so I will hopefully find out (although it could have been the Great Tits who then changed their mind and moved to the other nest box).
Lagt inn av rixy kl. 19:30