Maridalen before breakfast didn't deliver too much unfortunately. Tree Pipits (trepipkerke) have now joined the dawn chorus and there are more Wrens (gjerdesmett) and Willow Warblers (løvsanger) now but still no sylvia warblers. In the bay at Nes singles of Greenshank (gluttsnipe), Wood (grønnstilk), Green (skogsnipe) and Common Sandpiper (strandsnipe) were a nice selection of waders although there is no mud here so nothing to make them hang around.

The male Lesser Spotted Woodpecker (dvergspett) was very noisy with both drumming and calling at the Wryneck (vendehals) site and one of the Wrynecks was also singing regularly. I am sure that the Wrynecks have prompted more territorial behaviour from the woodpecker either because he confuses the Wrynecks call or maybe sees them as a rival for food. When I came home I also heard one of the local Lesser Spots drum and call briefly but they are much less vocal than the Maridalen birds at the moment.
To be able to see and hear both Wrynecks and Lesser Spotted Woodpeckers on demand at the moment is a real joy.

Some new Whooper Swans (sangsvane) arrived – a single adult plus an adult and 2cy bird – today to join the lone unpaired adult although may just have been passing through. Also two new geese. Both Canada (kanadagås) and Greylag Geese (grågås) have started breeding on Maridalsvannet in the last couple of years and I think that these feral geese are an unwelcome addition. Even worse though was a seeming mixed pair of these species that arrived today to join single pure pairs of both species. The hybrid that results from this pairing is the ugliest b’stard you can imagine and I really hope that they don’t get jiggy with Mr.Biggy and pollute the avian life in Maridalen!

There was a lot of beaver activity today with two animals seen together in the water, one up on land and another on a long distance swimming expedition over a kilometre from the hut.

Checking out Svellet after breakfast and delivering the girls I nearly got stuck in the mud as I waded out hundreds of metres due to the ever decreasing water levels. Greenshank (gluttsnipe) numbers are down to 318 so maybe they have already peaked but Wood Sandpipers (grønnstilk) still have a long way to go with only 25 today. Four male Ruff (brushane) were a nice if distant sight and the Knot (polarsnipe) turned up again alongside a single Redshank (rødstilk) and Ringed Plover (sandlo). Eight Whimbrel (småspove) joined nine Curlews (storspove). Two Common Terns (makrelterne) were also new in but there were very few passerines here.

In the evening I visited Maridalen again and what a difference 12 hours makes! The sun and wind had broken up the ice such that over half the lake was ice free and the remaining was being blown towards the northern end of the lake and in places accumulating in large piles – rather like ice bergs.

New birds were three Pink-footed Geese (grågås) were resting on the lake and a few House Martins (taksvale) and Swallows (låvesvale) feeding low over the fields with my first Swift (tårnseiler) of the year amongst them. 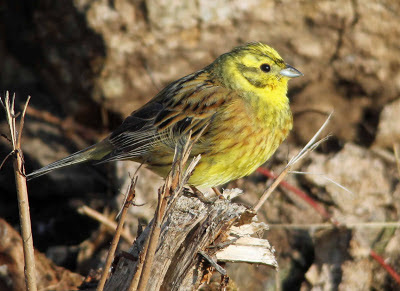 Answer to the mystery photo: it is a Wryneck sitting in a tussock of dry grass.