This evening I am off with Rune for a long weekend in Oppland and Hedmark where we will try to find a number of the specialities which I hope to be able to offer as a guided tour in the future.


This morning though I had a chance to get better acquainted with the Greenish Warbler (østsanger). As I parked the car there was a school class getting ready to go for a hike in the same direction as me. I hurried past them and walked the five minutes up to the scree slope as quickly as I could. The bird was singing immediately I arrived and this time not above the scree slope from the top of the tree, no it was in the understory and right by the path. I saw it immediately and managed a couple of dark grainy pictures which I was pretty happy about. The bird continued singing intensely and moved to the bottom edge of the scree slope. It was in a serious dispute with a singing (therefore I assume male) Willow Warbler (løvsanger) exactly as witnessed by Kjetil J on Tuesday. I was able to sit down and watch these two birds closely as they just cared about fighting and singing to each other. They even paid no attention as the school class walked noisily past.
I managed some pictures which I can be pretty pleased with but it was overcast so the light was not great. After 15 minutes at 10am I thought I would try to get some close video but then both birds shut up. I waited 15 minutes but there was no more sound (or sight) so I left fearing that the same would happen as on Tuesday that the bird took a late afternoon nap. Later in the day a second hand report that two birds had been heard singing came in so it begs the question as to why the Greenish Warbler is so interested in fighting a Willow Warbler when he has some real competition in the hood. 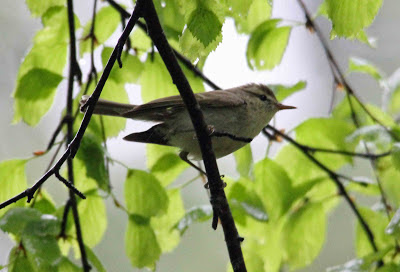 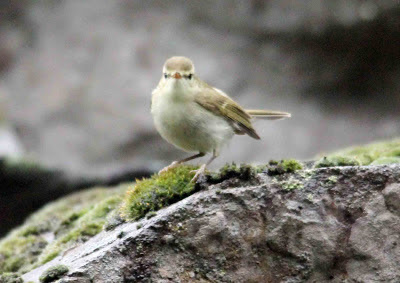 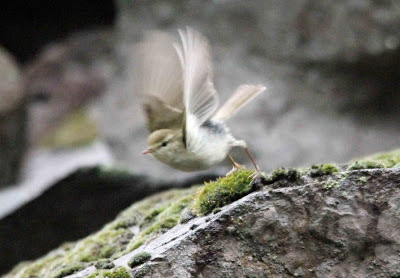 A quick stop at Fornebu failed to reveal the singing River Warbler (elvesanger) but nightime is undoubtedly best for this species. I did hear Marsh (myr-), Reed (rør-) and Icterine Warblers (gulsanger). A fly over Peregrine carrying food was presumably taking it to a nest site but must have been looking at a minimum of 7km flight to any suitable cliffs. From the single picture I took it looks like it might be carrying a Magpie (skjære) which must be heavy!


Another quick stop in Maridalen revealed no sign of the two male Red-backed Shrikes I saw yesterday but I relocated the pair at the same site as on Sunday and the male was courtship feeding the female so it does indeed look like they will breed here. Also another Marsh Warbler (and Per had two singing here) close to the pair and single female I have heard makes four singing Marsh Warblers within 400 metres of each other – new Maridalen record!