Yesterday started overcast and thunderstorms were forecast for the evening but the rest of the week looks even worse so I decided to make the most of the day.

A Red-breasted Flycatcher (dvergfluesnapper) was reported on Monday from Dælivannet close to Oslo so that was going to be my first stop. Before I had even left the house though I had a message from Kjetil J that the Serin (gulirisk) had returned for the fourth year running to Haslum Chuch which is close to the flycatcher. Two good birds to go for!

The Flycatcher was singing when I got to its favoured area and sang for the next 10 minutes but I failed to see it in the dense woodland even though it was close. It then shut up for an hour and I was close to leaving when it sang again and this time I located it. Inside the mixed spruce and deciduous wood it was quite dark so the pictures are all with a high ISO. Also I continually failed to capture it the few times it perched low down as the autofocus just wouldn't lock on. A great bird though and only my second ever adult male. Also in the area a singing, brown, first summer Common Rosefinch (rosenfink), Hawfinches (kjernebiter) and a Lesser Spotted Woodpecker (dvergspett). 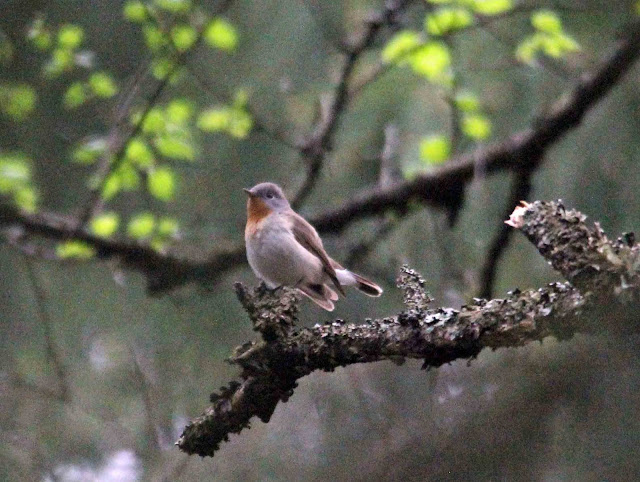 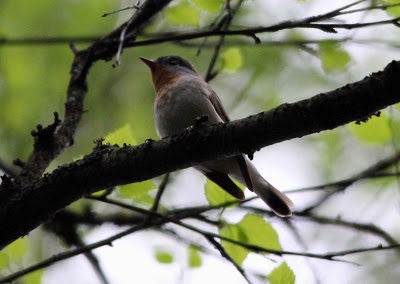 After all this excitement the Serin gave itself up very easily although always sat very high up as it sang its little heart out.

I paid my first visit to Maridalen for a few days and had a flock of 5 immature Mute Swans (knoppsvane) and two Whooper Swans. A Rook (kornkråke) with a flock of Crows (kråke) was my second record here this year but only my third ever on the patch. This bird had an adult like bill so was different to the 1st summer I had earlier this spring.

A few Yellow Wagtails (gulerle) included a singing male and one of the Wrynecks (vendehals) showed well.

In the early evening the sun shone but this was only a window of light before the thunderstorms were to start. I never the less headed towards Hellesjøvannet where a Great Reed Warbler (trostesanger) was heard on Monday. On the way I had three Honey Buzzards (vepsevåk) and a Hobby (lerkefalk) over the road and it looks like these late migrants are arriving in force. The Honey Buzzards showed very well although I underestimated how much I needed to adjust the exposure with the closest pictures. One bird was very pale and could almost suggest an Osprey. Looking at the pictures all three appear to be males due to limited barring on the flight feathers and grey heads. At Tuentangen two male Red-backed Shrikes showed distantly but I got my first picture of one for the year.

At Kjelle nine Temminck's Stints were nearly impossible to see feeding on a distant area of mud and a singing Spotted Crake (myrrikse) was completely impossible to see.
At Hellesjøvannet I had an hour before the heavens opened at 8pm. In this time I heard three Reed Warblers (rørsanger) and one Sedge Warbler (sivsanger) and saw a male and female Marsh Harrier. It then rained really hard for two hours and it wasn’t until 10pm that I was able to get out of the car and have a listen. Three singing Spotted Crakes was quite a result along with another Sedge Warbler but no Great Reed.
Driving home there were countless flooded fields and in two areas houses were flooded and people were standing outside getting assistance from the fire brigade. On the radio they were saying that there is a risk of a 50 year flood in many parts of Southern Norway due to combined heavy rainfall and melt water from the mountains.
Lagt inn av rixy kl. 01:20