It’s not just spring that has started early this year, so has the guiding season! This week I am guiding British photographer Ian Silvester for 5 mornings. Today was a bit overcast but the rest of the week it looks like the weather will be on our side so let’s hope the birds are also cooperative.


Today we started with a walk around Østensjøvannet. There are still just two areas of open water but these have grown in area with the warmer weather we are currently having and the numbers of Mute Swans (knoppsvane) and Goldeneyes (kvinand) have increased with the Mute Swans being territorial and the Goldeneyes displaying. A pair of Wigeon (brunnakke) added some nice colour and are early migrants. Some Goldcrests (fuglekonge) and Treecreepers (trekryper) came very close to us but were in constant motion although one male Goldcrest did give a very good show. As I tried to ensure Ian got good photos I forgot to take my own until nearly too late and my one effort is nothing like the pictures Ian got. An adult male Goshawk (hønsehauk) put on a good display as it flew over being mobbed by a Crow but was a bit too distant for my camera at least.
Oslo’s Famous Grouse had to be visited and was easy to find: just find the photographers! I was slightly hesitant about putting out the news of this bird last week as I knew how popular it would become and was worried how much this would disturb the bird. But seeing as how I only saw the bird due to its finder sharing the news on Facebook and the very urban habitat the bird had itself chosen then I could hardly not share. Today there were at least 8 photographers there whilst we were there and although the bird generally appears unaffected by human presence (it for example walked towards us on a couple of occasion) it clearly has it limits and on one occasion appeared agitated after a photographer came to close (seemed to want the bird to do something rather than just sit in the snow…). It stood erect and I felt sure it would fly and so upped the shutter speed to ensure a sharp action shot. It then started calling though – at first a quiet murmuring which Bjørn Olav had recorded and not necessarily species specific but then a clear grouse call which matches exactly Ptarmigan (or at least recordings of this species as I cannot say I am be well acquainted with the call). I was keen to record this as nobody else has reported this call so changed to video on the camera. Of course whilst I did this the bird stopped calling and flew so I failed on two accounts! It only flew 20 metres and landed in a large open garden bordering the wood where there were various buds that it found to eat including low hanging birch buds. Feeling that the bird had had enough of our attention Ian and I walked around the wood and saw Crested Tits (toppmeis) and also found footprints and dropping from the Ptarmigan a long way from where the bird is most seen and admired. Quite why it therefore chooses the most disturbed area is a bit bizarre given there seems to be a lot of heather and blueberry bushes (favoured food) in other areas plus other open areas with snow which is quite essential for it at the moment if its white plumage is to act as camouflage rather than making it stick out like a sore thumb.


Satisfied with our mornings birding I dropped Ian off at his hotel and then went to Maridalen to see how things are. There is still a lot of snow so no migrants on the ground yet although a Skylark (sanglerke) did fly over. I had 5 moose again running as though scared but in a different area this time. They did appear to have been spooked but I could see no humans or dogs nearby – maybe it wolves (wishful thinking).
I didn't think I had taken that many pictures today but found out that the Ptarmigan and moose did fill up quite a few MB on the card! The white Ptarmigan in white snow with sunlight pose a few technical issues but luckily Ian taught me a thing or two - not that it necessarily shows on these pictures....
﻿﻿﻿ 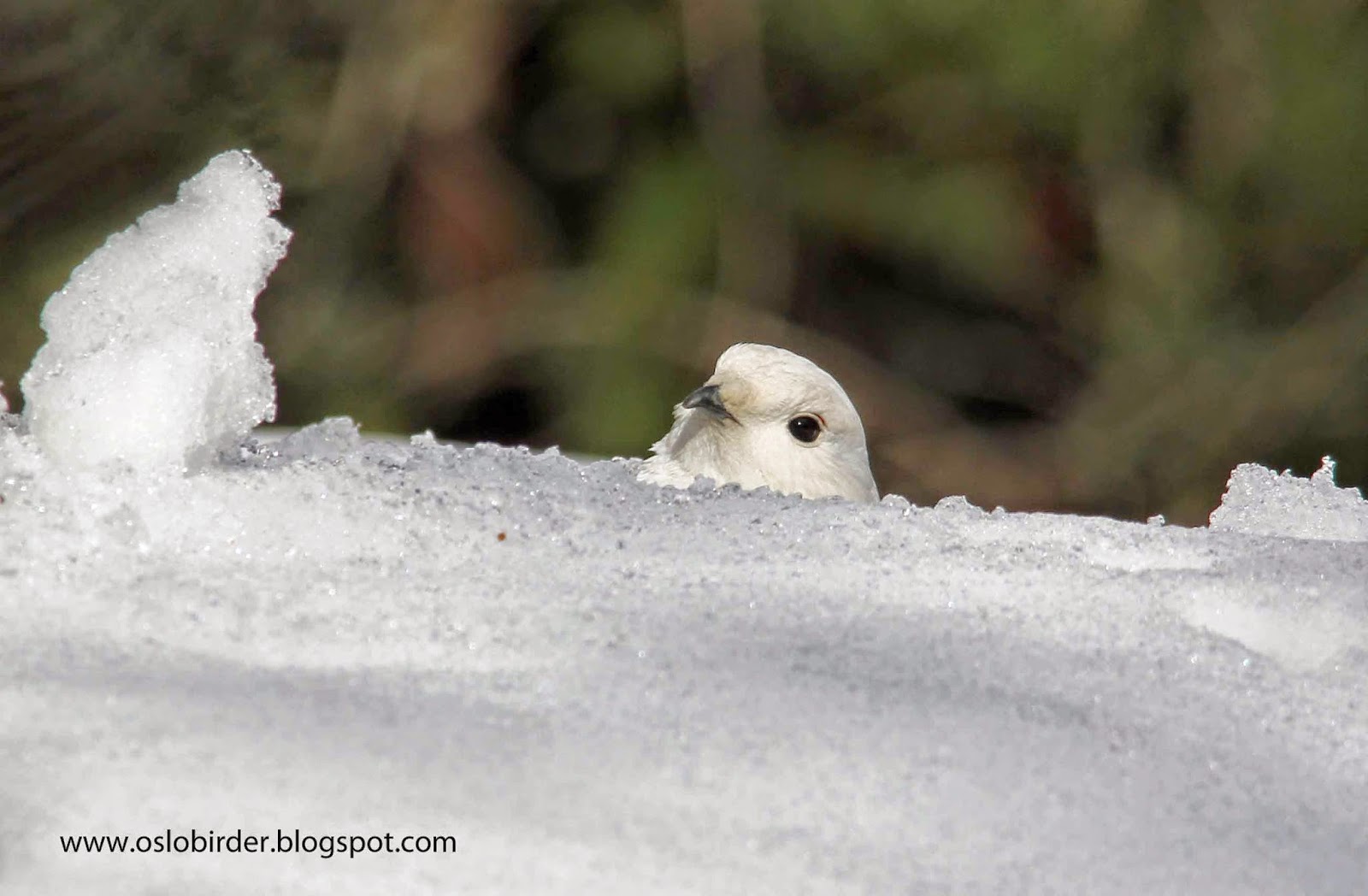 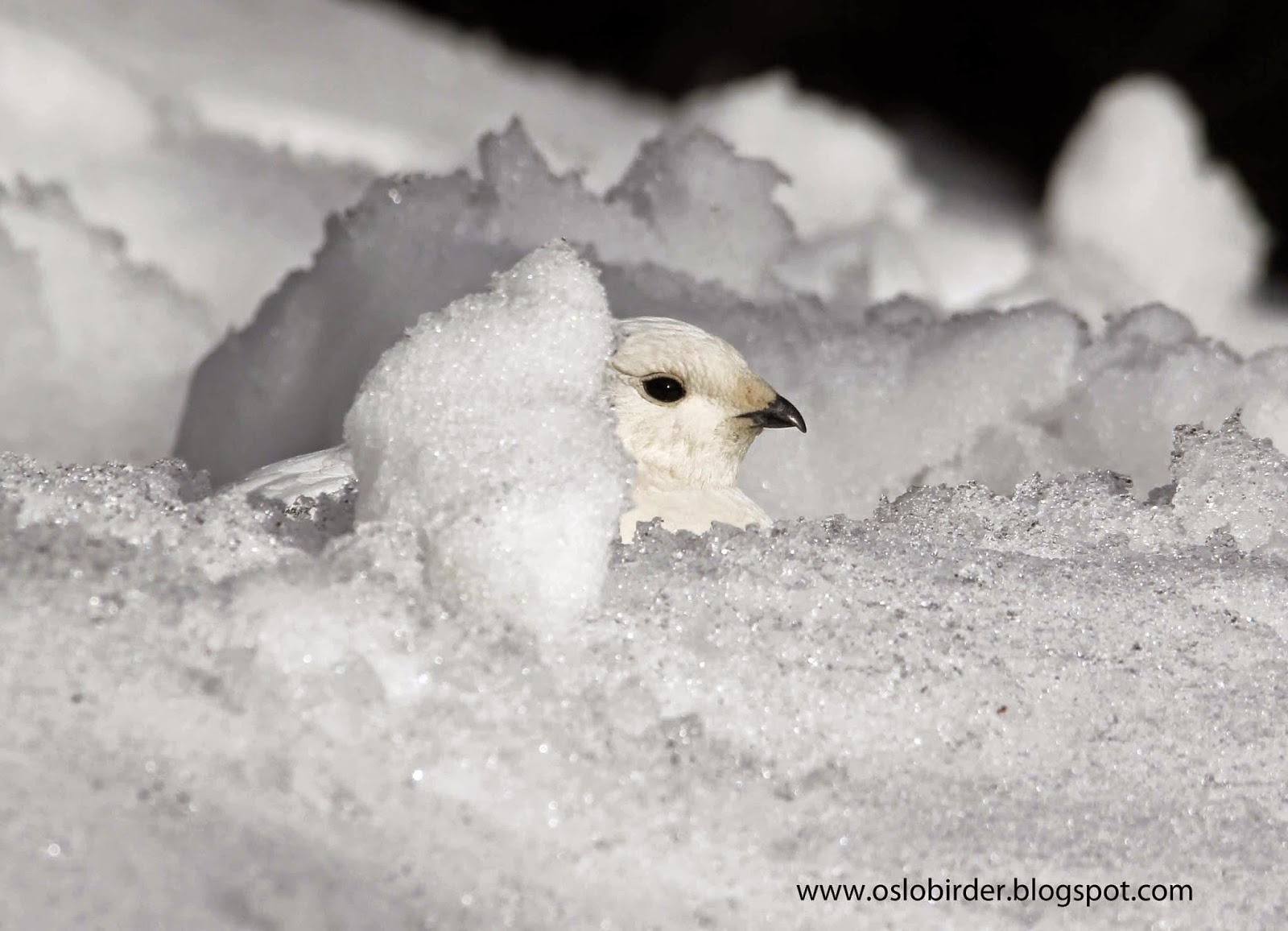 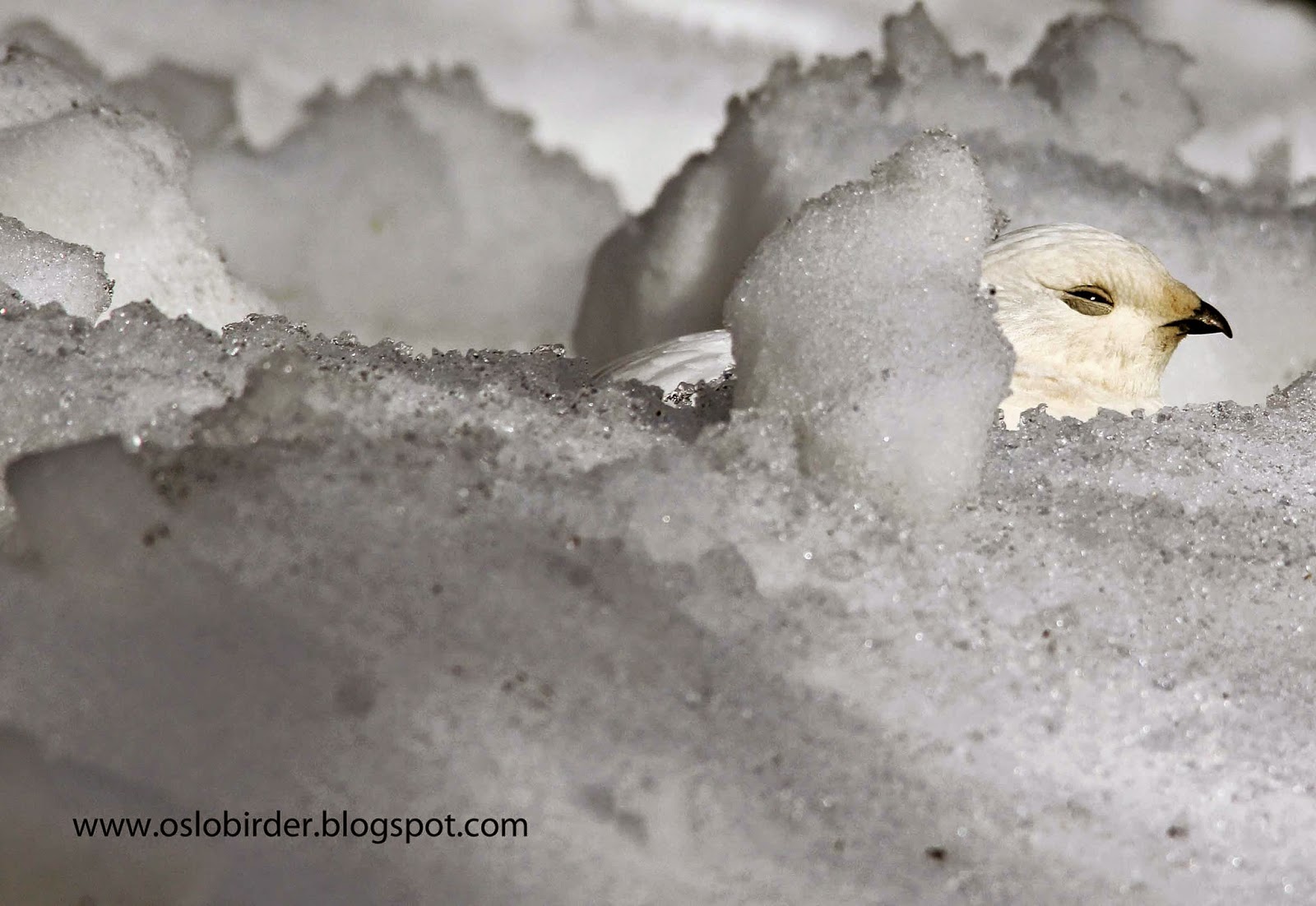 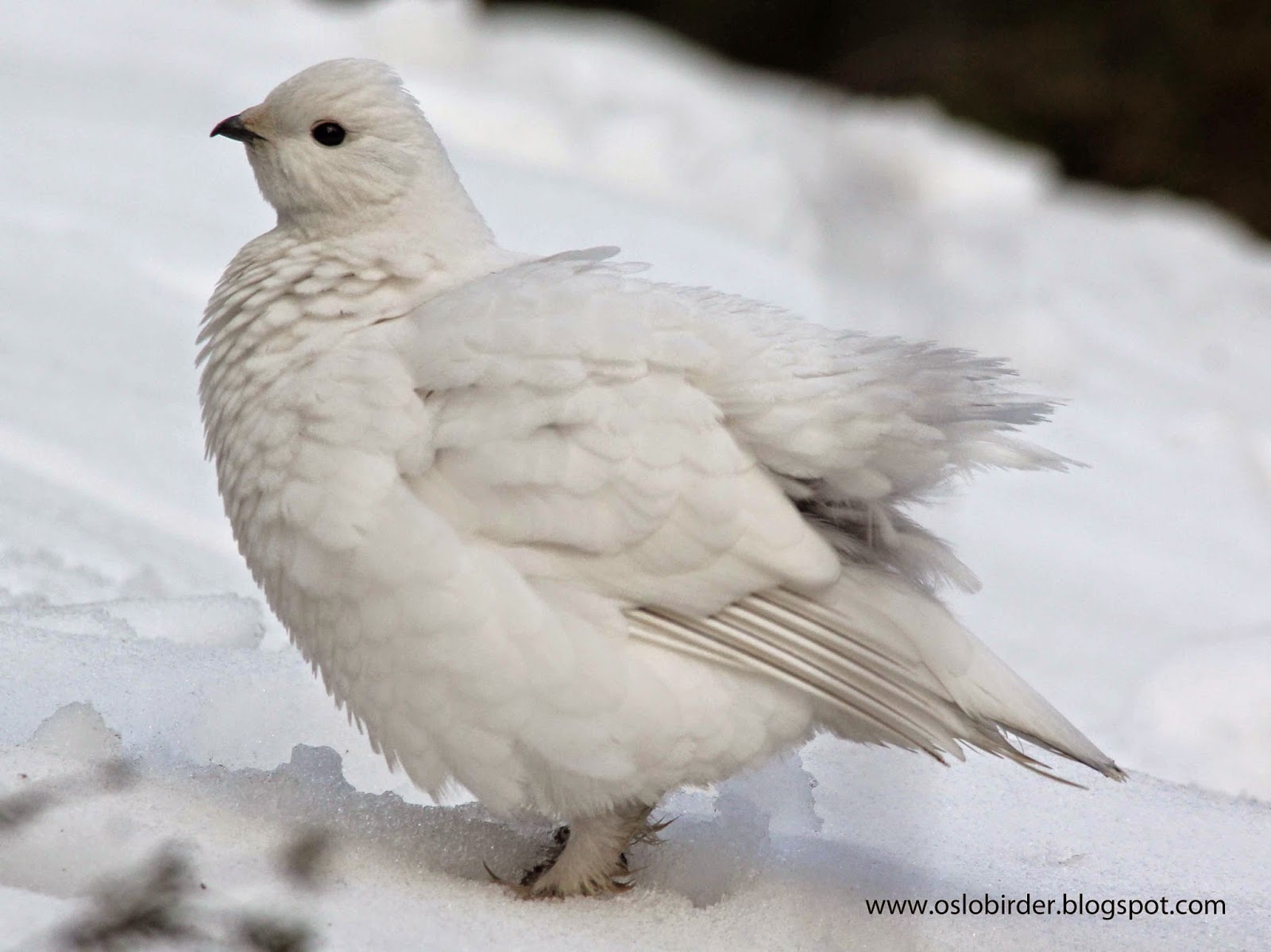 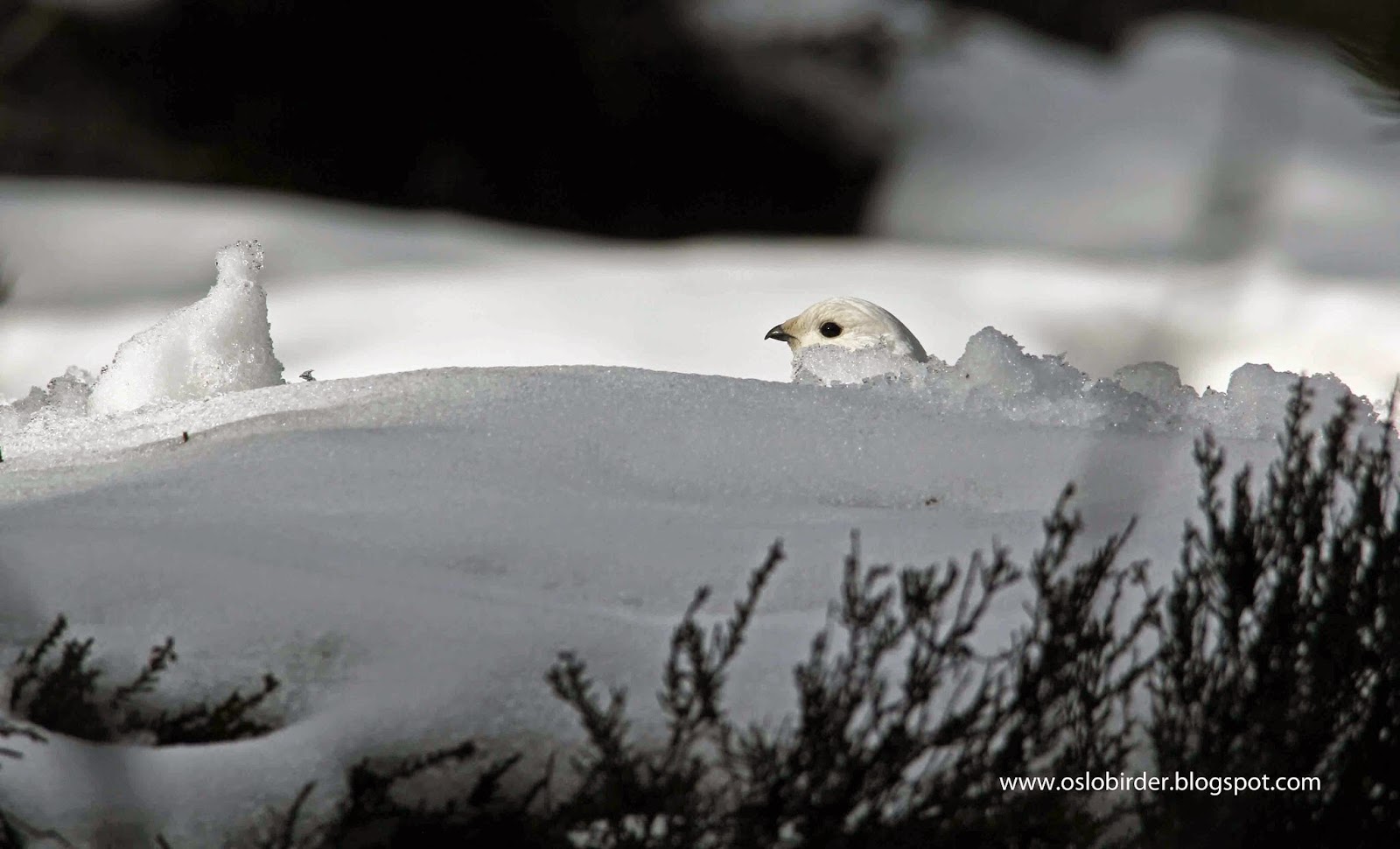 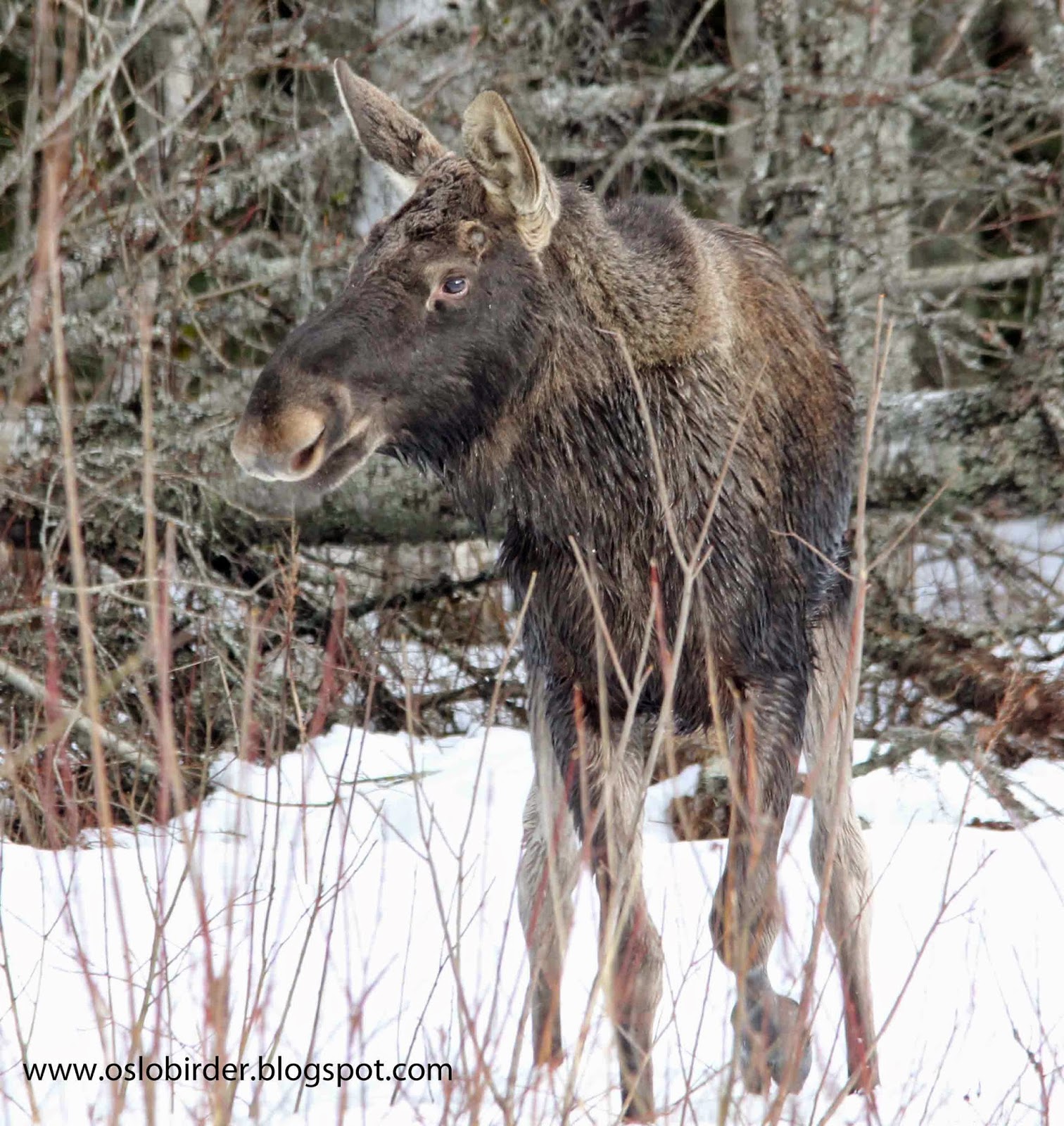 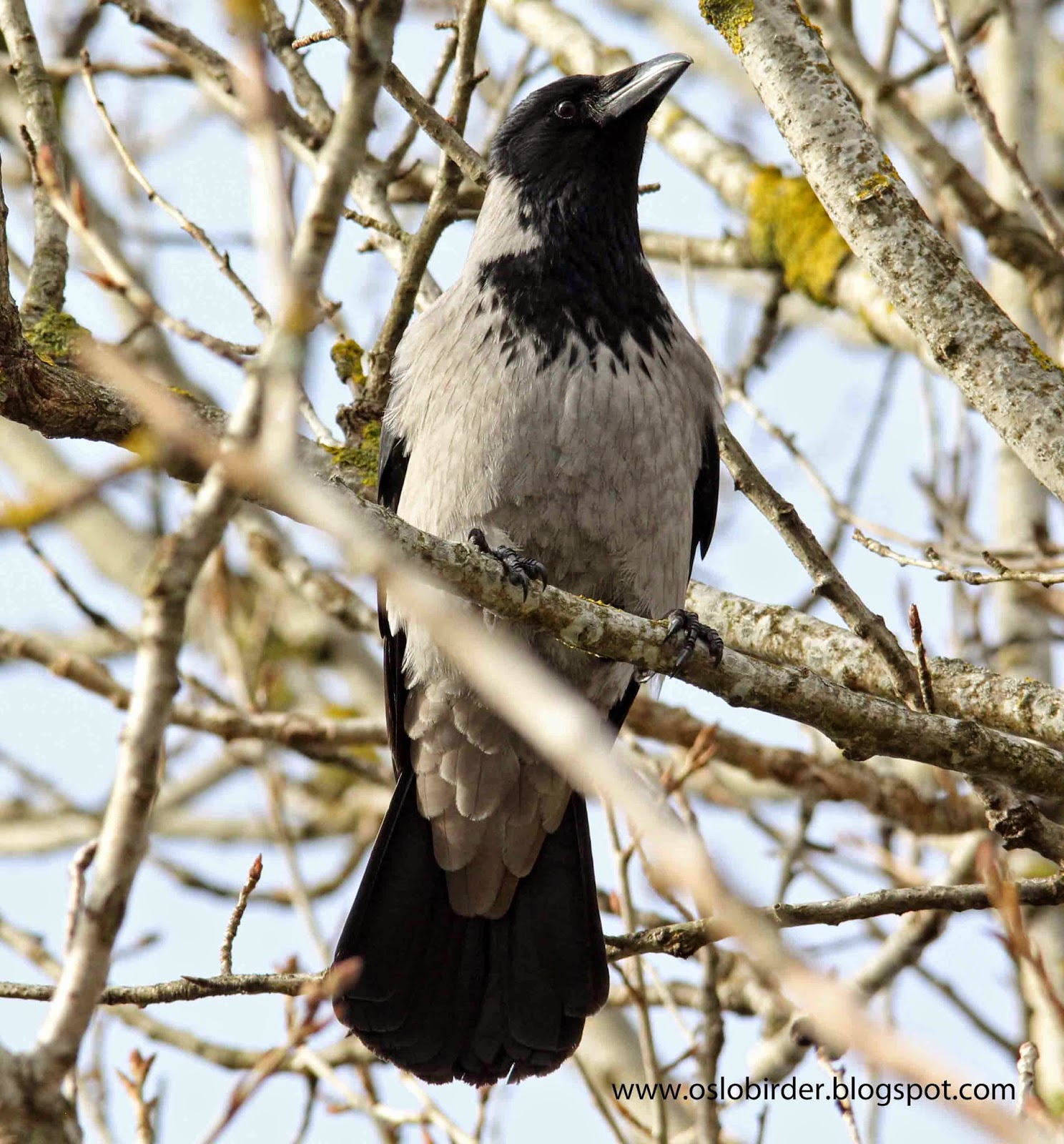