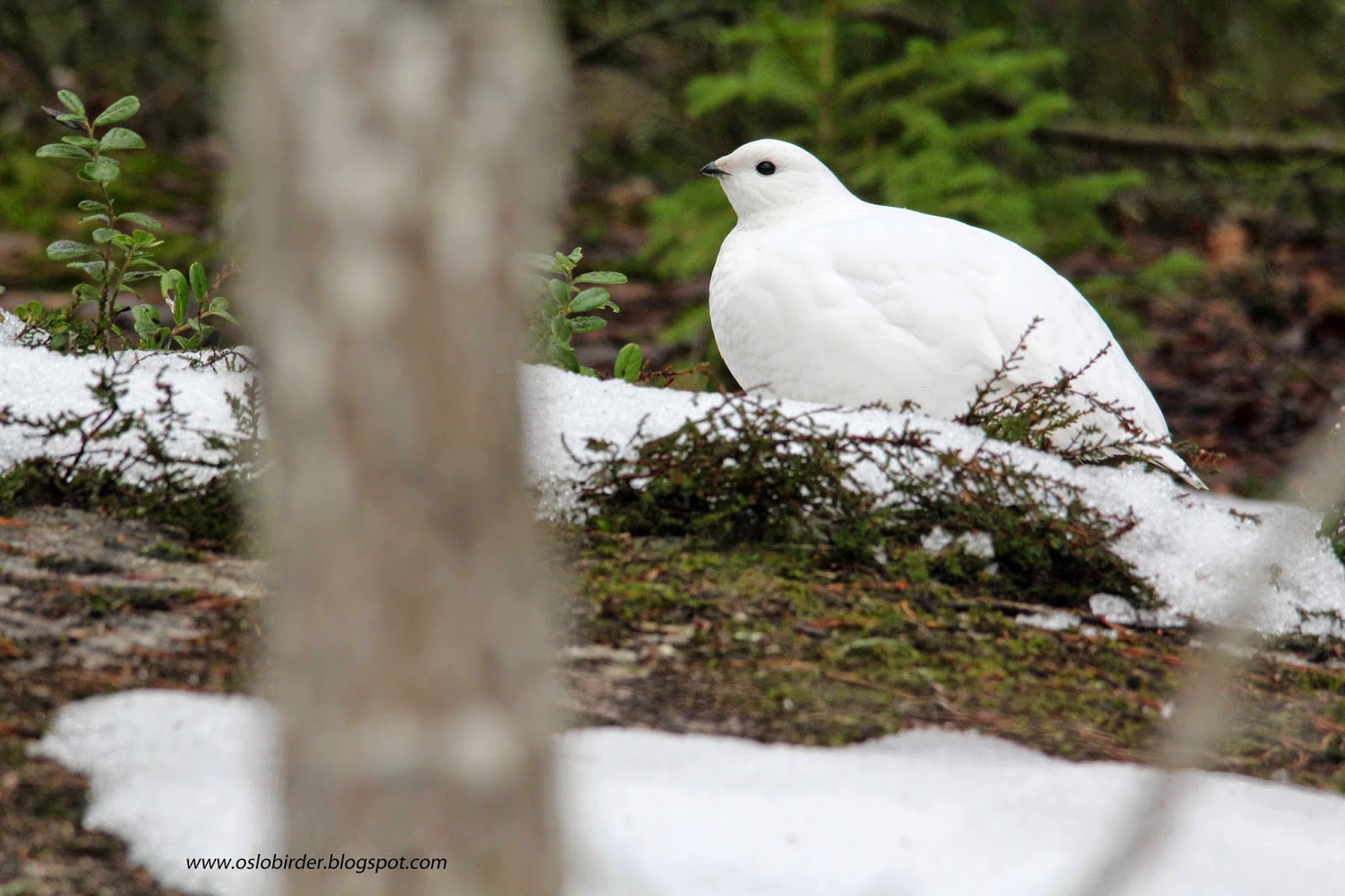 One of the great things with birding is that it never fails to surprise. On Facebook yesterday there was a fascinating report of a Grouse (rype) seen in a small wood within urban Oslo. I didn’t really expect this bird to be “twitchable” so made no plans to go looking for it today. Instead I headed out east again where Stig Helge Brasnes could report that the spring flood had started at Kjelle and the first geese and swans were thee. He had also seen some crossbills nearby recently which could well have been Parrot (furukorsnebb) and I had a hope of getting some photos. Weather-wise the temperatures are holding just above zero so the thaw is continuing but with a fresh southerly wind and rain in the air it was quite unpleasant being out. There were only small numbers of geese and swans with 30 Whoopers (sangsvane), 55 Canada Geese and 5 Greylags (grågås) but they should build up to many hundreds over the next couple of weeks. My first two Lapwings (vipe )of the year were as hoped for as was a heard only Skylark (sanglerke) and a Great Grey Shrike (varsler). I searched for crossbills but found none although it was far from ideal conditions for searching for forest birds.
With good time on my hands I headed home wondering what else I should do. I stopped at Langtjernet on the chance that the Caspian Gull may still be around but there were very few gulls. However the hybrid Carrion x Hooded Crow that has been seen a few times was on the ice and looking pretty ugly.


Still with a bag full of time to play with I realised that it would only be a small detour on the way home to the area where the grouse was seen yesterday. I wasn’t going to search for a needle though so found the phone number of the lady who had reported the bird and rang her. She was most pleasant and helpful and described exactly where she had seen the bird yesterday which was not deep in the wood but right on its edge by a road. I drove there, got out of the car and as Garner would say BOOM! There was a fluffy white bundle of feathers just metres away from me!! I must admit I began to think it was a stuffed bird and I was the victim of an early 1 April prank but it moved! I watched it, filmed it and photographed for around an hour and saw it feeding, shitting, ducking when a falcon-like Pigeon flew over and generally looking healthy. The fact that it was sat in exactly the same place as yesterday, in a city, by a building site though does suggest that this bird is a beer short of a six-pack, a spanner short of a tool box etc etc. But what a bird, my best views ever of the species and something I never, ever, thought would end up on my Oslo list. Edit: this bird has turned out to be a Ptarmigan and not a Willow Grouse - unbelievable!
I even got the tripod out and made an effort with regards to my photos and video. 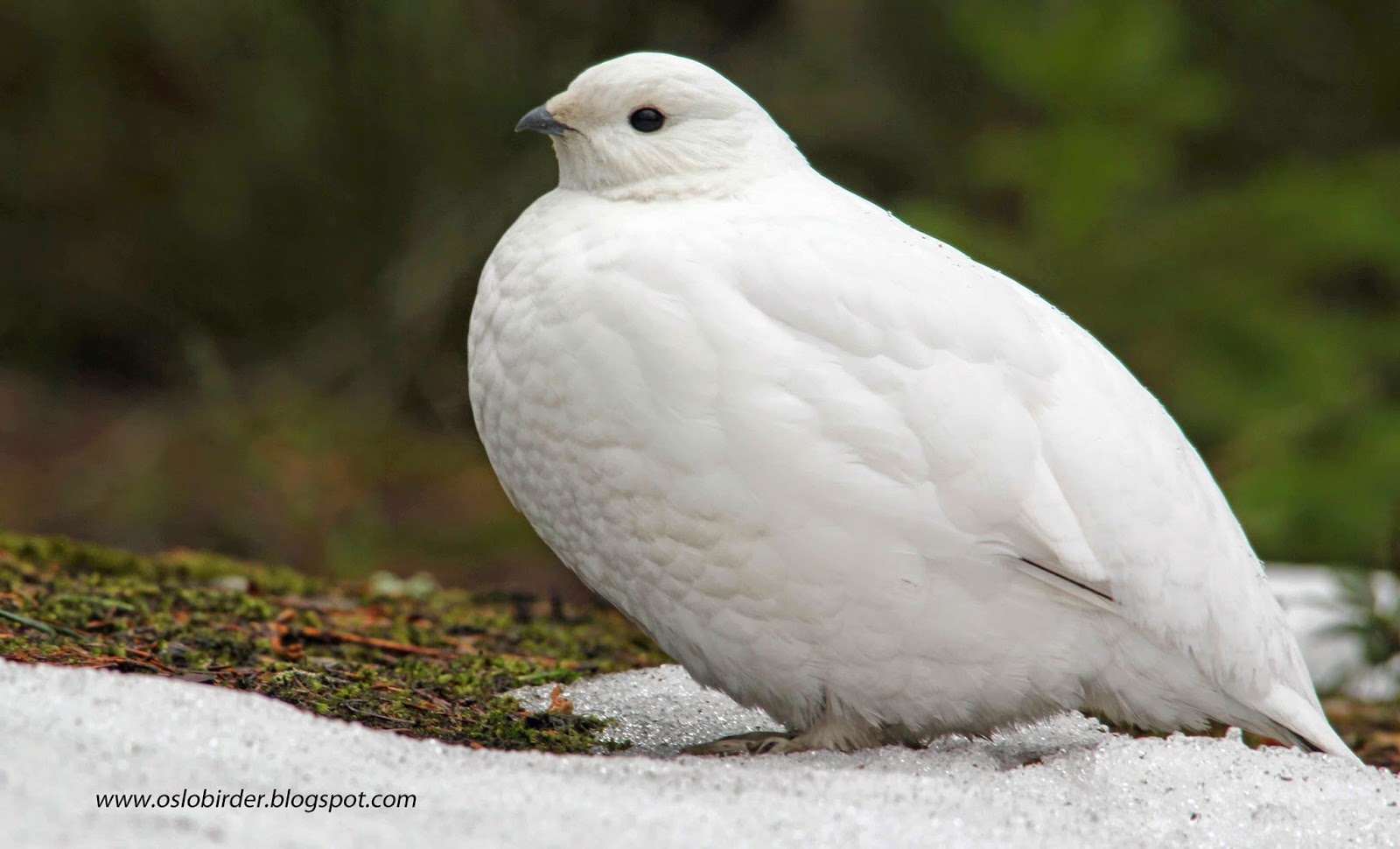 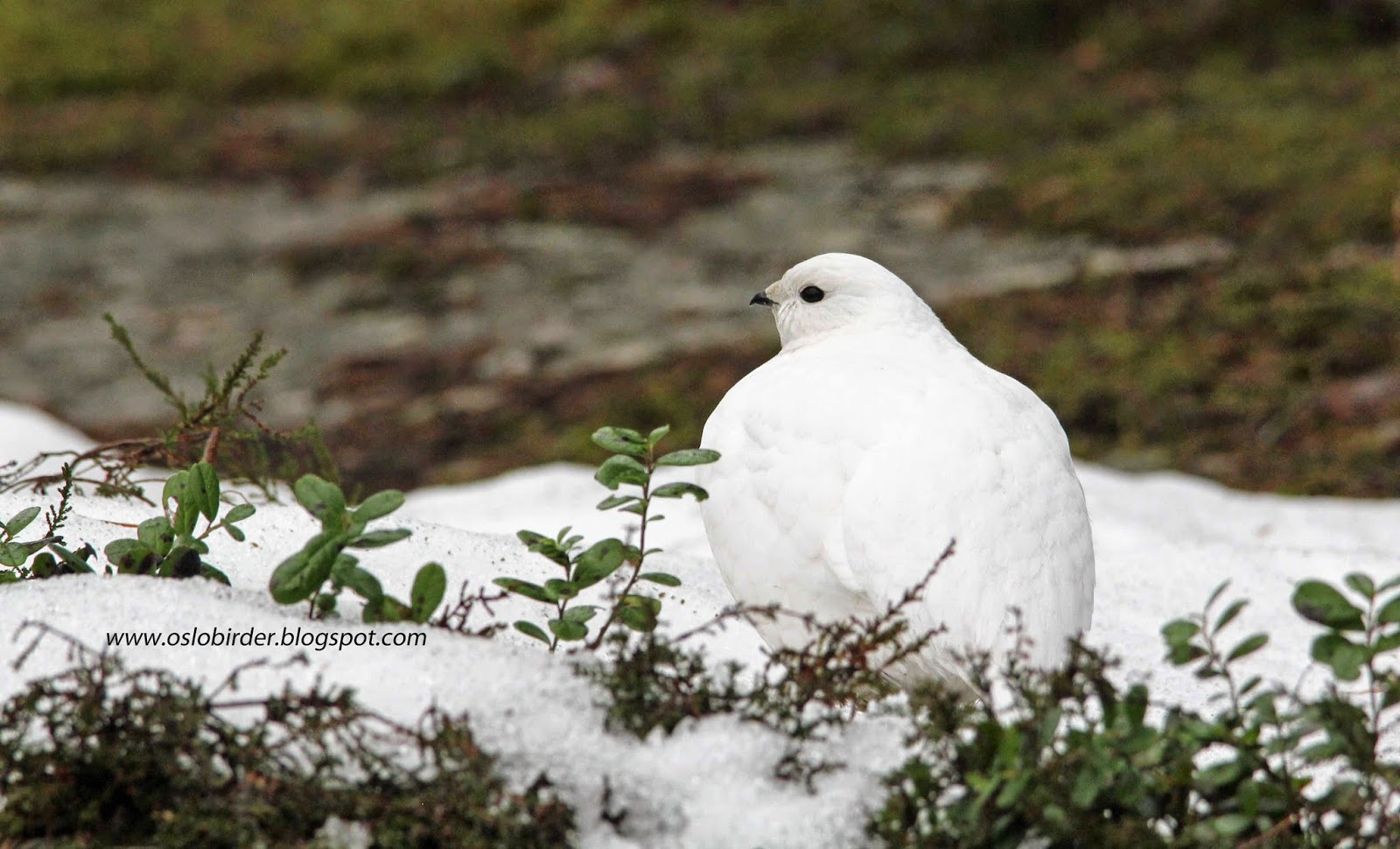 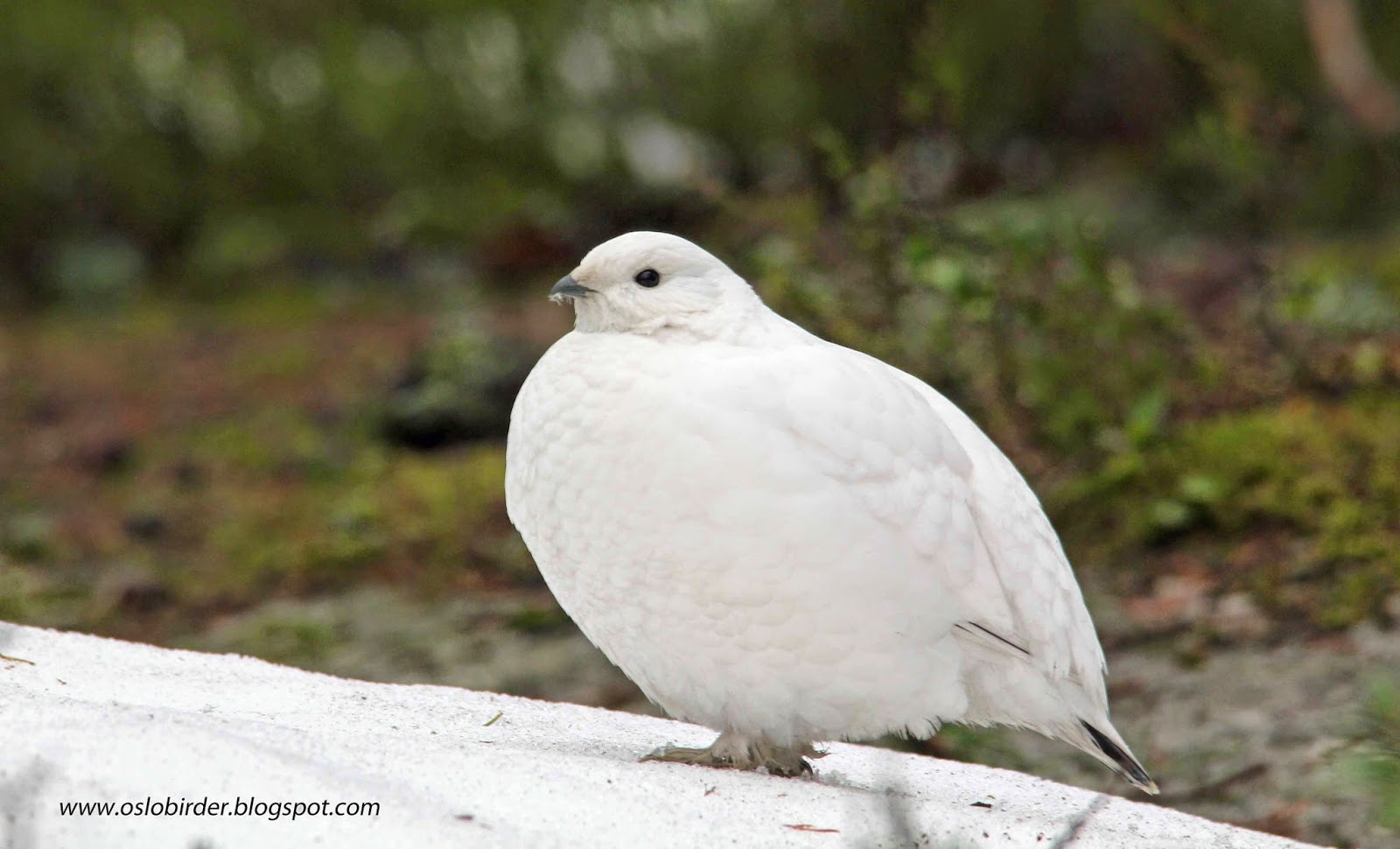 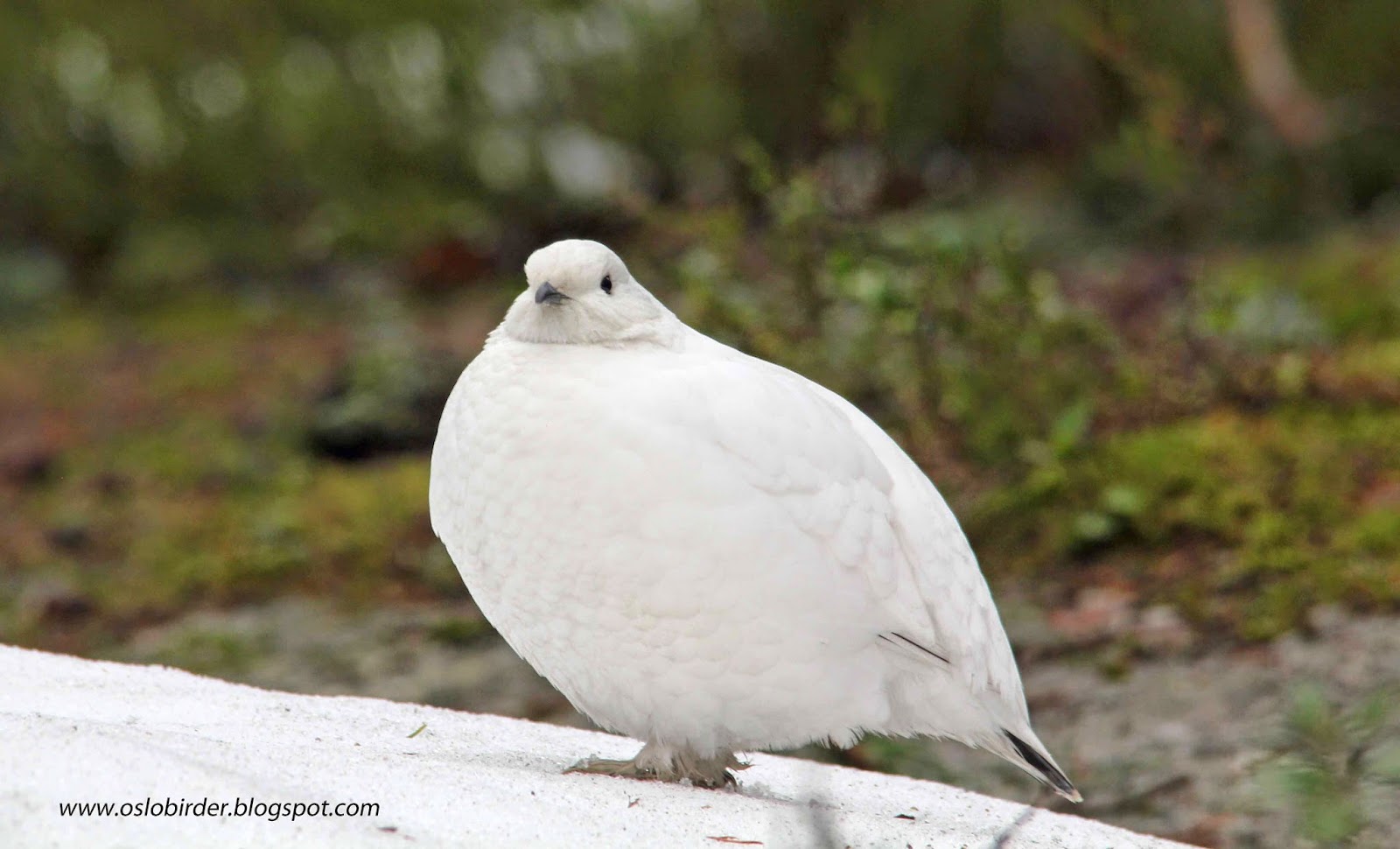 and some of today's other birds which were also quite noteworthy but got rather eclipsed by the now Famous Grouse.