The blue skies and warm sun gave a false impression today: temperatures in the shade did not rise above zero and the north easterly wind was still bitterly cold. Still it is much better here than in Vardø where the participants of Gullfest 2013 have northerly winds of 15m/s and snow – for those who brave the elements though there could be a Ivory or Ross’s Gull blown in.

I gave Østfold a go today hoping that I might be able to find some signs of spring here. Well there weren’t any! I did have four different Rough-legged Buzzards (fjellvåk) but these were all overwintering birds. In the woodland at Alby, Jeløy I couldn’t locate any woodpeckers, just lots of squaking and creaking trees. This Treecreeper (trekryper) did give me the best photo opportunity I have had with the species but despite being ridiculously close to it I was unable to get an angle that didn’t have some vegetation in the way. 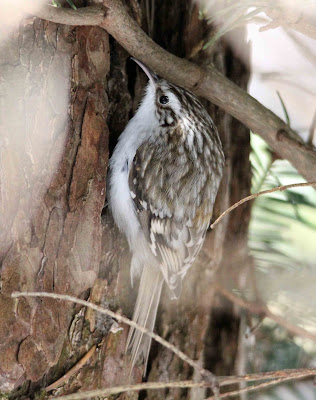 I took the scenic route back home via four Hawk Owl sites but found none (none have been reported for weeks so that wasn’t surprising but an addict doesn’t always listen to his head).

Around the house there are still some Waxwings but the apples they have been feeding on are nearly gone. Spring must be a very tough time for these birds as there is very little in the way of fruit left and it is still months before there are insects for them to eat.