I set out today to see if any flocks of geese or swans had returned to Akershus. Given the cold spell we are having with lots of snow on the fields and frozen lakes and rivers I didn’t have high hopes and wouldn’t have searched today were it not for a flock of four Bean Geese that have been sighted over the county border in Oppland. I did see in total 40 or so Whooper Swans (sangsvane) on a mostly frozen Glomma river but these may just as well have been overwintering birds as spring migrants. If the cold weather continues as is forecast it will be the end of the month before any flocks find suitable areas for feeding and roosting. I searched the Glomma south of Årnes and then went over towards Bjørkelangen conditions were no better here.

With just a single Great Grey Shrike (varsler) as the only bird of interest I thought my only hope of finding something good came from the blue skies and near windless conditions which may encourage an eagle to soar or a Hawk Owl to perch openly. I drove through the forests of Rømskog and then along the edge of Hemnessjøen without noticing anything other than blue skies, ice and snow. Arriving at Hellesjøvannet it was the same story but as I came to the farm at the northern end I thought that a telegraph pole had something funny on it. Now I have, as of late, been paying little attention to telegraph poles and instead scanning tree tops as these seem to have been favoured by Hawk Owls after the snows came. I should have realised that with the thaw coming and some suitably exposed slopes already bare then telegraph poles might become popular again. 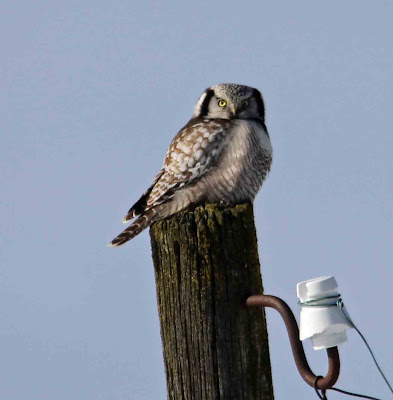 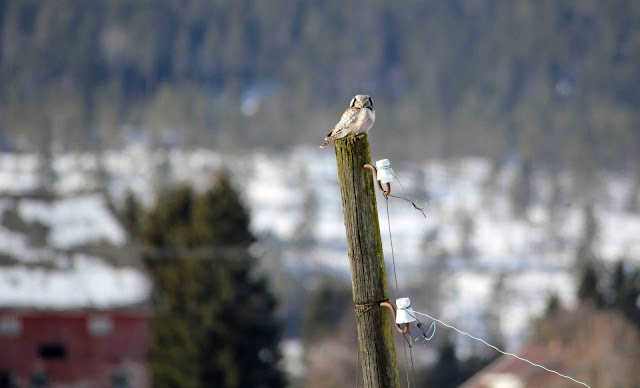 A Hawk Owl has been reported a handful of times from Hellesjøvannet but the last report was 1 Feb. This could well be the same bird that has gone unnoticed since or just as easily could be a new bird moving through. This bird proved to be of the shyer type and flew off to a tree top a couple of hundred metres away when I crossed the threshold of its comfort zone. I then retreated to the car and reviewed the pictures I had taken whilst occasionally looking up to see if the owl was still sitting atop the tree. I was looking at pictures for less than a minute when I looked up again and saw the owl in flight flying away from me back towards the tree top. A look in the bins showed it to be carrying a vole. So in the course of maybe 40 seconds it had heard or seen a vole, flown 200 metres, plunged, captured it and managed to fly off with it!
It then flew out of sight to devour its prey. Judging it unlikely that it would be hunting again for a while I continued north towards Oslo.

The days most remarkable sighting came just at the southern end of Bjørkelangsjøen. At 13:40 I picked up a raptor. Stopping the car it turned out to be a White-tailed Eagle (havørn). This is a good sighting but what it most remarkable is that it was in exactly the same spot where I observed two sea eagles (also migrating north) on 15 March last year (at 13:50). Very few migrating eagles are noted in Akershus so to see birds in exactly the same spot by chance a year apart suggests there maybe a flyway over this area.
As the eagle flew away from me I was able to drive ahead of it and stop where I thought it would fly over the road. On stopping I could not locate the bird until I looked directly over my head and there it was circling. By my judgement it is a 3 Cy bird due to moulted inner primaries and two generations of secondaries which can be seen by the uneven rear edge to the wing. IT WOULD APPEAR MY JUDGEMENT IS WRONG AS A FAR MORE EXPERIENCED EAGLE AGER HAS AGED IT AS A 2CY. THE TAIL IS APPARANTLY THE BIGGEST GIVE AWAY AND THE WING DOES APPARANTLY NOT SHOW SIGNS OF MOULTED FEATHERS AS I THOUGHT!