Even more to write about

So using public transport (the day ticket very generously provided free of charge by the garage - equivalent to a 0.5% discount on the repairs!) I decided to bird Oslo. The signs of spring were a bit more difficult to find today with low cloud and temperatures around zero. There is still snow on all the fields and the forecast for the next week is for temperatures below zero 24/7 so winter hasn't let go just yet.

I visited Frognerparken twice hoping to be able to get better pictures of the Iceland Gull (grønlandsmåke) than yesterday. At 10.00 there were no gulls to see at all perhaps due to the low cloud. Returning at 13.00 there were a number of gulls coming to bread and it was with them. However a loose dog then ran onto the ice and repeatedly disturbed them. They flew up but quickly landed again although the dog didn’t give up and they eventually flew up to a nearby roof top. I took some pictures of the gull here but then they all flew back down to the ice and scoffed the bread that was lying on the ice. I managed a few pictures here before they all flew to the other end of the lake where a lady was throwing out bread. I hurried over there (not easy when there is ice everywhere) and was rewarded with the Iceland Gull at a couple of metres range. Close range though doesn’t necessarily mean that it is easy to take good pictures. It was too close, I was above it and the background was ugly although amongst all the pictures I have found that are OK especially one flight shot. My time with the bird was cut short when all the gulls, Jackdaws (kaie) and Feral Pigeons (byduer) flew up in the air. It took a couple of minutes before I saw the reason which was a male Goshawk (hønsehauk). The gulls flew off in a tight flock and didn’t return in the next half an hour. It is interesting that the dog was merely a nuisance for the birds whereas the Goshawk was seen as deadly threat. 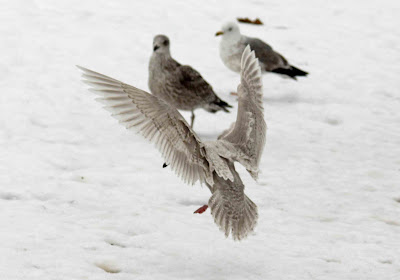 In my travels today I saw in total nine Greylag Geese (grågås) and three Wood Pigeons (ringdue) so they are starting to arrive in force and a pair of Whooper Swans (sangsvane) heading north were a pleasant sight and a taste of things to come. 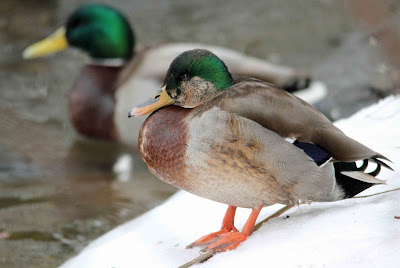