Bitter is a word that conjures up different emotional images in my mind. There are the warm, pleasant images based on that special English type of bitter: a warm, yet refreshing London Pride or maybe a Ruddles County although I wouldn’t say that the mental images that Old Thumper conjures up for me are in any way pleasant...

There are also the unpleasant, cold feelings related to the word bitter and today was a BITTER day. The north easterly wind made -5C feel like -50C. I tried a couple of minutes of seawatching and the pained expression on my face was nearly frozen into place.

The wind and snow from the weekend meant that it was hard going today and I found none of the summer visitors that I had hoped to see. Skylarks (sanglerke), Starling (stær) and Lapwing (vipe) that had started to arrive in Vestfold were not to be seen today having had to presumably escape to the south.
Nine Rooks (kornkråke) back at their colony in Horten and a single Great Grey Shrike (varsler) at Borrevannet looked like being the highlights of my day until I arrived at Presterødkilen in Tønsberg. Although still completely frozen here I hoped that the reedbeds might give up the Water Rails (vannrikse) or Bearded Tits (skjeggmeis) that are wintering here. There is a stream flowing into the reedbed which never seems to freeze over (good ole pollution!) and I have previously heard Water Rails here. Today though I was lucky enough to SEE three! I reckon I have seen Water Rail probably only 10 times ever and only on two occasions can I remember that the views were close and prolonged. Today though one bird in particular showed exceptionally well feeding in the open and close – only around 10 metres from me. The cold weather has probably forced them into the open but this stream is also right by a path so the birds have likely become used to people. I am quite happy with the pictures I took which are the best of around 250 that were on the memory card. 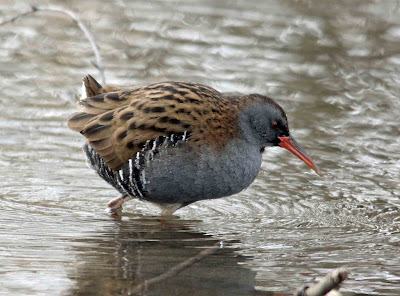 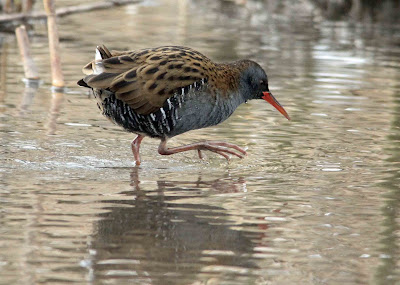 And a very short video

After being very satisfied with this close encounter I went looking for the duck that has a good dose of Black Duck (rødfotand) genes in it. I eventually found it with a handful of Mallards at Husøy although it was a bit distant. A Little Grebe (dvergdykker) was close by.

Driving back to Oslo I had another Great Grey Shrike and a stop at Sandvika was productive. The cold weather has resulted in bays in the fjord freezing over and the open water at Kadettangen has a congregation of 72 very hungry Mute Swans and 200 Mallard (stokkand). Amongst them was the overwintering Pink-footed Goose (kortnebbgås) that had relocated from Oslo, 4 newly returned Greylag Geese (grågås), five Goldeneyes (kvinand) and best of all the overwintering Smew (lappfiskand) which has normally been a distant sight off Fornebu but was now easy to see at close range. The brown lores show this to be a young female and most likely the same bird that first turned up in August last year.