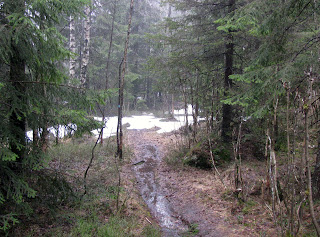 .. in terms of weather and birding trips. The first half saw me up in Maridalen in mist and temperatures of only about 5 degrees. Despite this the ice is melting fast and the lake is now around 60% frozen. All the waterbirds of yesterday were gone (showing how active migration is at the moment) and were replaced by 8 Pink-footed Geese, 3 Grelyag Geese and 2 Black Throated Divers. Also nice was a group of 8 Golden Plovers flying around seemingly confused by the mist and a Curlew also flying around rather forlornly. I headed up into the forest hoping to find evidence of Black Grouse. It was rather miserable in the forest with verly little to see or hear. I did hear a Black Grouse calling whislt I was approaching the lek site but when I got there I drew a blank (maybe they heard me approaching and flew off). Evidence of their presence is shown below: 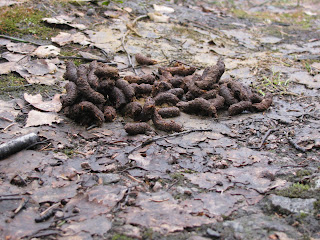 Otherwise I glimpsed a Hazel Grouse and found a pair of Willow Tits inspecting a potential nesting site.

The second half was an afternoon trip with Bjørn Olav Tveit, author of the recently published first ever where to watch guide for Norway. Despite Bjørn Olav's knowledge and warm sunny weather with southerly winds we saw very little at Nordre Øyeren. Numbers of Teal were very much reduced from earlier this week with only a couple of hundered present. A few Greenshank were picked out at about 1 kilomotres range but nothing new except for a couple of House Martins amongst a handful of Swallows.
On the way back to Oslo we popped in at Østensjøvannet which is rich shallow lake within the city limits. A White-fronted Goose had been reported earlier and we easily located it - most likely the same bird seen earlier in April at Bygdøy. Also present was a strange hybrid seemingly paired with a Barnacle Goose. It can be seen in the following photo along with the White-fronted Goose, Barnacle Goose and Greylag Goose. I reckon it is a hybrid between Barnacle and Grelyag. 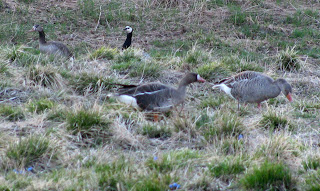