My belief that tomorrow would be the BIG day was again mistaken. It's a bit like when we go walking in the norwegian mountains and I confidently tell Rita that now are we in perfect Dotterel habitat - we never see them!
So, I arrived at Fornebu at 0830 this morning to be met by fog that didn't lift until 1030! Fog is never conducive to see much. I did hear a Water Rail singing though which was new for the year.
As soon as the fog lifted I had a migrating Sparrowhawk closely followed by a distant flock of 13 Cranes migrating up Sørkedalen. This was promising. But over the next 2 hours I added only a couple of other Sparrowhawks, 4 Goshawks and a pair of Kestrels. Where were the Buazzards and Pink feet? It was warm, sunny and a slight southerly breeze. Isn't this the right weather for migration? At least I wasn't the only disappointed birder at Fornebu - I was joined by a couple of other equally expectant soles.

On the way home all the geese and ducks were still present at Bygdøy and the Teal had risen to 18. Having been told that a Great Grey Shrike had been seen in Maridalen the last 2 days I took a trip up there but couldn't find it. Did see over 200 Twite and 100 Chaffinches though which was a pretty good count.

The pictures show one of the Goshawks and the fog lifting at Fornebu. 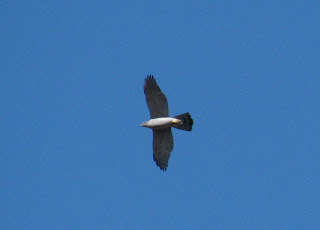 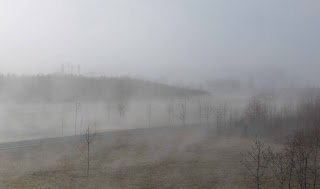