Yesterday saw me up at Maridalen fairly early but low cloud and cold temperatures resulted in few birds although Song Thurush was new for the year and a calling Lesser Spotted Woodpecker was a good bird.

Down to Bygdøy again for another look at the geese. The Taiga Bean and White-fronted Geese were both still present along with a pair of Gadwall which were new for the year and a good bird in these parts.

At lunch I saw that a Mandarin (a Norwegian tick) for me had been sighted at Østensjøvannet so I went for it and easily saw it along with Moorhen and Coot which were new for the year. 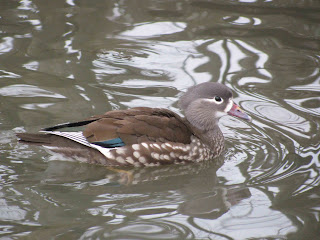 Today I headed South East to Aurskog Høland. Here there is annually flooding which attracts water birds and especially Whooper Swans and Cranes. In total between the towns of Lierfoss and Bjørkelangen I had 480 Whopper Swans and 125 Cranes. Also to be seen were 6 Golden Plover with 50 Lapwings, 7 Green Sands, 4 Wigeon, 20 or so Teal (many hundreds will appear in the coming weeks), a singing Great Grey Shrike and a Rock Pipit in amongst 80 White Wags and 2 Meadow Pipits. The habitat of a flooded field far more suited Water Pipit which would have been a major rarity but it was just a nice scandinavian race Rock Pipit coming into summer plumage. Here are 2 videos. The first of the shrike with calling Golden Plovers in the background and the second displaying Whooper Swans (be warned they are quite noisy!).