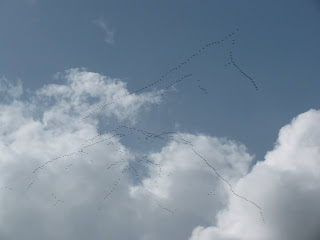 .... and I saw them. 3540 to be precise between 11.00 and 14.00. This little film snip shows a large flock going over.
I had cycled up to Maridalen to see if there were any signs of Black Grouse at a lek site I found last autumn but there was too much snow on the forest tracks for me to cycle there so I was on my way home when I heard my first flock of geese going over and then after seeing another 2 flocks I realised that something big was happening. There were in total 23 flocks during the three hours with the largest being 380 birds. I had not taken any food with me but managed to persuade Seamus that what he needed to do was have a bit of exercise and an outdoor lunch. Surprisingly enough he agreed and at 1pm i was enjoying cheese and salami sandwiches. Here is my lunch arriving. Otherwise, there was qctually quite a bit to see with 3 Black Throated Divers now on the small area of open water, 4 Teal, an Osprey which appeared from the south and after a look at all the ice disappeared off to the south again. The Buzzard was still present and one of the local Goshawks was taking an interest in the Wood Pigeons again. In the forest I found Crested and Willow Tits a small flock of Bramblings and best of all this Lesser Spotted Woodpecker. I know that this is an absolutely atrocious video but you do get to hear the bird calling and drumming which in the UK at least is a pretty rare sound these days.