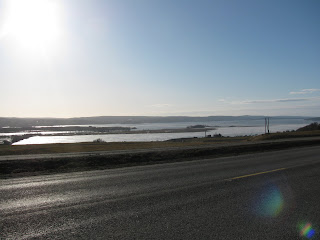 ....but not where I had chosen to be! Many thousands of Pink-footed Geese migrated over Oslo today but I had chosen to go elsewhere so didn't see a single one. My destination today was first to Årnestangen which is a part of Nordre Øyeren, a Ramsar site and supposedly the largest inland delta in northern europe. This picture shows a part of the delta with Årnestangen being the slither of land winding its way out into the water. The water is shallow here and large mud flats are frequently exposed attracting many thousands of water birds although they are frequently very distant and difficult to see. The ice is only just starting to melt and the mudflats are mostly covered in ice hence are not yet suitable for waders. The reason for my trip here was the sighting yesterday of a Gyr Falcon which I still need. Needless to say I did not see it today but I did have Osprey plus a Smew which was new for the year and also my first Curlew. There were many hundreds of Teal, Mallard and Whooper Swans on the water and a touch of spring was given by a Snipe giving its "chipping" song. The sun was still shining today but factor 25 suncream ensured that I came home no redder than I left! 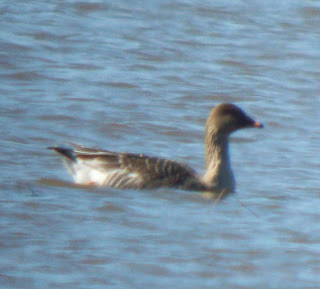 After Årnestangen I visited Aurskog Høland again. The river between Leirfoss and Bjørkelangen was still in flood and in total I had 145 Cranes, a couple of hundred Whooper Swans (markedly fewer than a week ago), 200 Teal (markedly more than a week ago), a pair of Pintail and a Buzzard. The Cranes were very flighty and making a lot of noise. At Bjørkelangsjøen I bumped into a couple of other birders who had just found a Bean Goose which turned out to be of the Tundra variety. This is different to the one that I have seen at Bygdøy (the Taiga variety) due to being smaller, darker and with a smaller bill with much less orange. The top picture shows the Tundra Bean Goose and the lower picture the Taiga Bean Goose with most of the key features being visible. 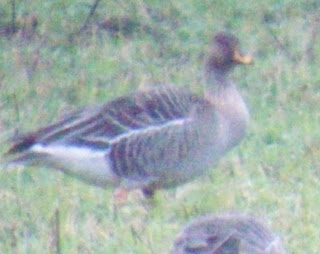