A Norwegian tick and 7 year ticks were the highlights of yesterday, a day characterised by, to paraphrase a failed politician, geese, geese, geese.
I started the day at 0830 in Maridalen but in lowish cloud there was little to see and no real viz mig. A flock of 15 Twite feeding in a small snow free area was nice and a few Skylark and White Wagtails gave a definite spring feeling. Otherwise Chaffinches and Siskins were frequently calling, a Robin was new for the site this year and 6 Goldeneye with 2 displaying pairs had found enough open water on the lake. The following photo shows how Maridalen looks at the moment. The fields in the foreground have a few patches of bare ground but otherwise snow still lies thickly and the lake in the background has a solid covering of ice. 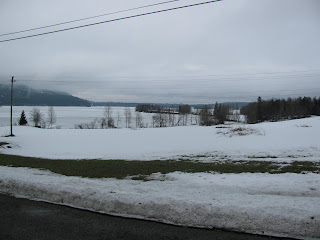 By 1000 I had put in enough time at Maridalen so the coast at Bygdøy beckoned. Bygdøy is a peninsula within the city limits that amongst other things is home to the King’s farm which has meant it has remained relatively undeveloped. It had been reported yesterday that a number of geese had been seen in a flooded field with one reporter seeing 6 Pinkfeet and 2 Bean and another reporting 8 Pinkfeet. What would I find? Well, I found 8 Pinkfeet, 1 Bean, around 90 Greylag, 16 Canada and 5 Barnacle Geese. The Bean Goose was a very distinctive bird and consorted with the Greylag and was rarely to be seen together with the Pinkfeets although I did get the following terrible photo showing all 3 species. 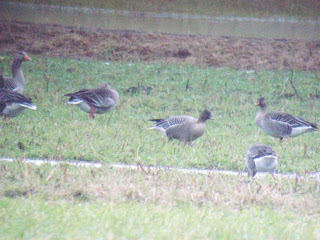 Also at this site was a pair of Wigeon whose frequent calling had me thinking of winter birding in the UK. 4 Chiffchaffs, 5 Reed Buntings and a Redwing were all year ticks. Leaving the site I saw another birder viewing geese in another field. Stopping I asked the Norwegian equivalent of “what’s about” which is “har du sett noe”. To my surprise the answer was affirmative. He had a White Fronted Goose which was a Norwegian tick for me. The bird showed very well but was not a classic bird due to it being a 1st winter with only the beginnings of the white front and no black belly barring. However the identification was sure and soon another birder pulled up to ensure a three birder twitch entailed. Little else to see at this site other than more Greylags and soon I had to head for home so the kids could search for evidence of the Easter Bunny. 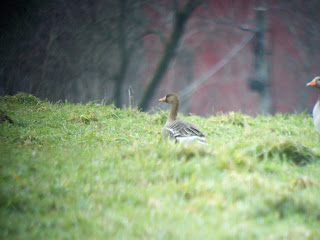 At home a latish flock of Waxwings flew over the house and a walk along the Akerselva in the afternoon had a group of 3 Cranes flying north at the same spot we had seen migrating Buzzards two days previously.

As I write this on Sunday morning a Dunnock is feeding in the garden taking the year list to 96.
Lagt inn av rixy kl. 08:25