Last night on the way home from the shop I had 250 Pink footed Geese flying north over the house. This and a look at the weather forecast for today (southerly winds) had my expectations very high for a day of considerable goose passage.

So after dropping the kids at kindergarten it was off to Fornebu were a few years ago I was lucky enought to witness around 12,000 Pink feet migrating in a single day in the middle of April. On getting out of the car it was clear there had been an arrival of both Song Thrushes and Chiffchaffs and both proved to be common as were Reed Buntings. I decided to walk around the site first before sitting down to scan the sky as experience has told me that the goose passage doesn't really kick off until late morning as the geese will have set off from north Denmark the same morning. 4 Kestrels were on site and 3 of them were calling noisly around a nest box so hopefully a pair will try to establish itself. On the sea which is still frozen in many places there were numerous Eider and Goldenye plus a few Teal. I disturbed a Snipe and heard a Pheasant both of which were year ticks but there was little else to see. 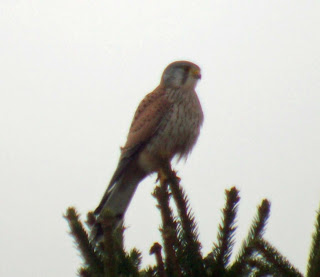 At 11.18 I saw my first flock of 60 Pink feet heading north at some height. I was quite sure this was going to be the start of something big especially when a Buzzard also went over but then nothing much else happened. Another flock of 65 at 11.50 was followed by 25 3 minutes later but then it started to rain hard and the cloud came down. A flock of 200 battled through very low at 1203 but after that there was nothing to see. If there were any flocks still migrating then I assume they ditched down on the sea or had looked for an alternate route avoiding the rain. Interestingly the flocks seemed to choose different route north from the Oslo fjord with 2 choosing Sørkedalen, 1 Maridalen and the fourth seeming to be heading for Grorudalen.

Popping in at Bygdøy on the way home revealed all the geese and duck still present but this time with 12 Teal new in. Will Garganey turn up here?

I am predicting that tomorrow will be the big day for Pink feet. We will see.
Lagt inn av rixy kl. 22:12