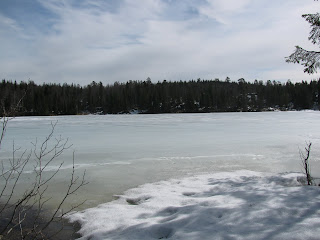 Yesterday saw me on my bike riding 43km in the forest north of Maridalen. Sporting a new pair of cycling shorts it was a lit less painful than my previous excursions on my bike this spring but I was still fairly sore when I got home (I was also exhausted!). Higher up the lakes were still completely frozen
and I could not complete my intended route as snow and ice covered the forest tracks which had not been used by cars. Birds were pretty scarce with a Buzzard, a pair of Black Throated Divers, 3 Crossbills and a few singing Tree Pipits the highlights. On returning to Maridalen a couple of Swallows were a pleasant sign of spring but otherwise there was very little to see.

This morning saw me up at 0430 in attempt to see Black Grouse at the presumed lek site I have found in the forest in Maridalen (the same one I visited on Thursday). There was mist and a lot of dampness in the air as I walked 2km through the forest. Little to hear on the way up (too dark and too misty to see much) with a very brief outburst from an Owl the only excitement. It was all too brief to identify to species but it could possibly have been a Tengmalms Owl which is at the top of my still to see list. As I approached the lek site I again heard the bubbling display call of a Black Grouse as you can (just about) hear on the following video.

I approached the lek site cautiously thinking I was hearing the birds from a 100 metres range but suddenly a calling male errupted from the ground only 20 metres away followed shortly by a female. Not very satisfactory at all. I could here another bird calling from the lek site but as I approached I realised again it was not at the lek but calling from trees close by. I sat within sight of the lek from around 0530 - 0600 but no birds came in to display and I could only hear very distant calls from other birds. A Green Sandpiper was flying around calling aswell as Crossbills and Tree Pipits. I decided to give up but on my way back I again heard calling Grouse from the area of the lek so returned very cautiously. This time there was I believe only one male displaying from tree tops. I heard it from 3 locations and managed the following photo as proof of its existence. 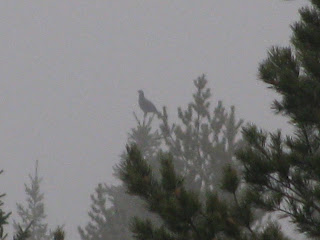 I'm not quite sure why I did not get to see the birds at what I have always presumed is the lek site but maybe the weather was less than favourable for full display?
Lagt inn av rixy kl. 08:38