Today I walked 12km through the forest north of Maridalen including an area of old spruce forest which holds Capercaille and Three Toed Woodpecker. What did I see? Droppings of the first and marks on trees from the second but did I see the birds? Of course not.
In fact I saw nothing out of the normal in the forest at all. The best birds were in Maridalen itself where I had in total 3 singing Roesfinches. The only one I actually saw was a brown bird so still no fine red male. Also good numbers of Spotted Flycatchers which looked to be newly arrived and a very distant singing Wood Warbler. Whilst sitting down to listen to the Wood Warbler, a Willow Warbler with a beak full of nesting material landed only a few metres away from me. After a couple of minutes it dropped down to the ground and after it had left I was able (after a bit of searching) to discover its tiny nest on the ground hidden under some long grass.
Also in Maridalen were 3 very small Lapwing chicks with a parent which was very satisying to see as they seem to get less common each year. 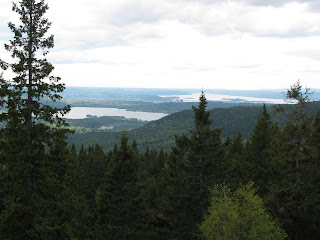 In this picutre from the high point of my walk (Mellomkollen) you can see Maridalsvannet (lake) on the left with Oslo city and Oslofjord rear right.
Lagt inn av rixy kl. 21:03