Another late evening visit to Maridalen produced large numbers of toads in the margins of the lake and these two hopping along the road. 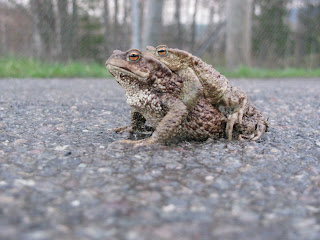 We also saw the Owl again and found its preferred roost site which was remarkably low down in a spruce tree. There were 3 pellets and they appeared mostly to have bird remains including feather shafts and a beak.

Early this morning a Red Rumped Swallow was seen at Fornebu and I was able to get down there an hour and a half later with the girls. Unfortunately we didn't refind it (as did nobody else) but there were good numbers of Swifts which were new for the year.
Lagt inn av rixy kl. 22:15