Chose to visit Østensjøvannet today, a shallow, reed fringed lake within the Oslo city limits.
When I got there at 10am the paths around the lake were already heaving with kids from the nearby school having running practice. The birds here though are quite used to this. I had Garden Warblers and Pied Flycatchers singing from scrubby areas and a Long tailed Tit getting very agitated with a pair of Magpies that were presumeably close to its nest. Overhead there were around 300 Swifts which have now arrived in force with a few House Martins and Swallows mixed in.
On the lake there were the usual Great Crested Grebes, Canada & Greylag Geese, Tufted Ducks, Coots and Moorhens aswell as many Black Headed Gulls which breed here. As I scanned the lake I heard a call which I couldn't place as a gull or a tern. And then I saw only 20 metres away a fine summer plumaged Little Gull. It was a very confiding bird and would have allowed me to take a great photo if only I had my camera with me. A mobile phone through the bins though is always a good alternative as this fine potrait proves. 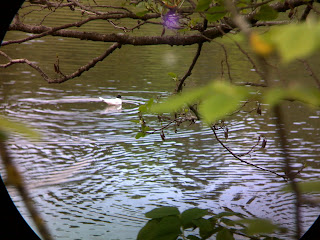 I texted the bird's presence to a friend who then put it out on the national alert system and after half an hour got a call from a birder who had come to look for it. He soon joined me and we had great views. Does one other birder qualify as a twitch?
The bird had a very small amount of black in the primary tips making it a 2nd summer but it also had a hint of pink on the body feathers. A fine fine bird.
Continuing around the lake I heard 3 (and saw 1) Reed Warblers and found a Pink-footed Goose and White-fronted Goose (which has been around for a coupe of months) amongst the Greylag Geese.
Lagt inn av rixy kl. 12:55