I went looking for the Black Redstart again today but this time cycled meaning I did not need to worry about the ridiculously expensive parking in the city centre and also gave the body a much needed work out. The bird was not singing straight away but after about 15 minutes of walking around it started singing in the same place as yesterday and then showed well (although far too high up) as it sang from an aerial. It moved a bit around the area including singing from the roof of Mrs. OB’s office and also dropped down into some narrow backyards which are squeezed in between high buildings. As I suspected yesterday it is a young 2cy male. The area where it is has many government buildings and I had a couple of coppers eyeing me up at one stage. Birding in cities is always a fairly uncomfortable experience especially if one is carrying around a bazooka but with my little super zoom I felt far less conspicuous.


In Maridalen I had 4 Common Rosefinches. Two were singing 2cy (brown) males who were both singing where I had had red males on Friday. I have often thought that the younger males can be dominant over the older ones and it looks like that might be so. I did have a red male at another site who wasn’t singing and also a brown bird that flew away calling from one of the singing males. I assume this brown bird was a female who may be touring the valley deciding which male will win her fancy. A Wryneck was singing vigorously and is presumably unpaired and at the Goshawk nest I looked as though the female was sitting on top of recently hatched young.


With sunny, warm weather and less wind than of late I had hoped for some raptors (Honey Buzzard and Hobby for example) but had to be content with just a single Common Buzzard which is the first I have seen for weeks although is probably a bird breeding in the valley.


It looks like one pair of Lapwings has fledged young (although I couldn’t see them in long grass) whereas another pair is still sitting on eggs which they have been doing since 4 May. Incubation time is apparently around 28 days so eggs will be hatching next week.
In this video of the Black Redstart you can hear him singing despite the ditance and all the other noise but the scratchy element of the song does not come through although atone point you see his beak open and hear nothing which is when the scratchy bit comes. 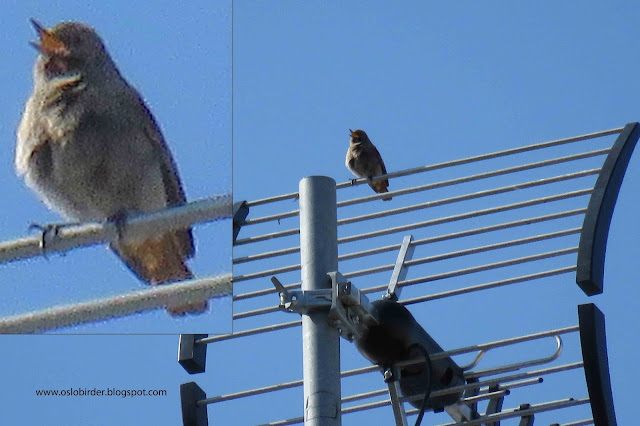 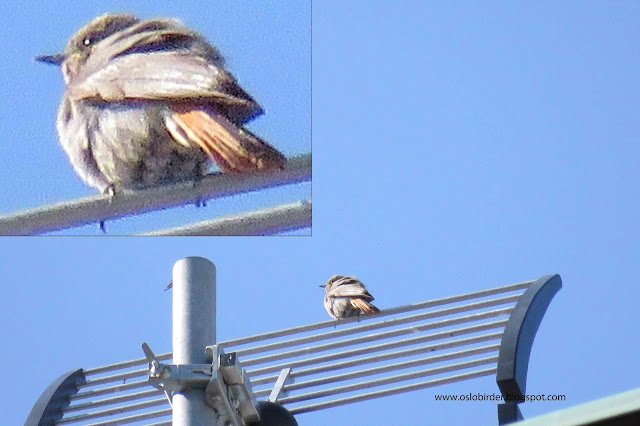 And a video from Maridalen with the male Lapwing, a singing 2cy Rosefinch and the Goshawk