You have to be in it to win it and Saturday morning was a struggle for me to get up. I managed to send Halvard H a message at 08:09 to ask if he had seen anything and then promptly fell asleep again. Waking an hour later I was very annoyed and jealous to see a picture of a pair of Garganey on my phone. This is a much wanted Maridalen tick for me and although I rushed up there in record time I could not locate them despite searching hard. The lake was nearly without a ripple and there were quite a few commoner ducks including 12 Teal and I was kicking myself for having not set the alarm.


With my oldest daughter having discovered she likes wildlife photography I had another visit to Maridalen in the afternoon but we again failed to find the Garganey but did have another Osprey and Black-throated Divers.


After this I had a stroke of luck. After the purchase of an icecream Jr was persuaded that a trip to Østensjøvannet would be a good idea. A 2nd summer Med Gull had been found here yesterday (and subsequently and unnecessarily blringed). I had seen no reports as to whether it was present today and when we arrived there were no birders looking for it and hundreds of Black-headed Gulls as far as the eye could see which made me think it was a hopeless task. I started scanning and amazingly enough after only a minute I saw the target bird sitting on the water! It promptly flew off but we relocated it 5 minutes later where it showed well. In this plumage it superficially resembles a Black-headed Gull but is a much smarter bird. It is long overdue that the large Black-headed Gull colony at Østensjøvannet attracted a Med Gull and with global warming it wouldn’t surprise me if this species became regular here over the course of the coming decade.


On Sunday morning I was definitely in it but whether I won it is another question. I was up in Maridalen from 0620 and was lucky enough to experience rain, sleet, northerly winds and temperatures just above zero. Were they any interesting birds? You can bet your *rse there weren’t! Bramblings had arrived in large numbers with at least 1000 in the valley and they were making a right din but other signs of migration were hard to come by with a single Ring Ouzel standing out.


On the breeding bird front there were some promising signs. The Lapwing population in the valley seems to comprise 8 birds although I haven’t confirmed whether that means 4 pairs. They have been hanging about on a single field at Skjerven farm (where I saw a pair mating today) but today two of the birds have moved to the recently ploughed fields at Kirkeby and were intensely displaying and buzzing me as I walked along the path. This has been a traditional nesting site although they did not nest last year and I feared that was that so let’s hope there is success this year although with the number of cats I fear that any fledglings will have a hard time (in 2014 three hatched but I don’t think any fledged).


I also had, despite the weather, Skylarks at four separate sites in the valley which seems (without checking) to be more than usual.

First some pics and a video of the Med Gull 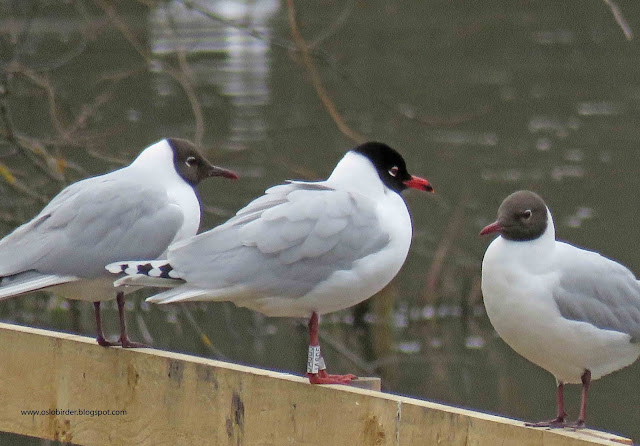 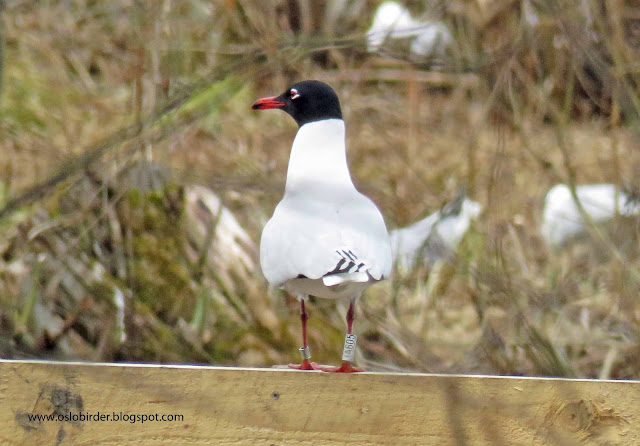 and Sundays highlights: a video where you can here the din that Bramblings were making all arounf Maridalen and a distant and grainy Ring Ouzel

And now for some good photos. I am lucky that we have one good photographer in the family - here are OsloBirder Jr's pictures from Saturday: