Not often that I write two posts on the same day but after finishing my earlier post I come over all weird and had a strange twitchy feeling that I can’t remember having had for decades. I willed Mrs OsloBirder to get home from work and at 1745 I was in the car. Leaving a bit later meant I missed the worst of the afternoon traffic but I still felt that everyone else was driving far too quickly. But I still managed to get there quicker than the GPS predicted ;-)


Three others including Messrs Gullberg and Zakariassen were already staking out the bird but it wasn’t a difficult one to pick out. It was with a handful of Common Eider less than 100m offshore and it looked like they wanted to come close into shore presumably to feed on mussels so I would imagine that there are some very good photo opportunities waiting to be had if the bird hangs around and the weather brightens up. But what a bird. OK, I’ve seen them before in Varanger in large flocks, in great light and in amazing landscapes but an adult male a stones throw from Oslo Centre was not something I was expecting.


It gave me another opportunity to put the new camera through its paces but that jury is still out.... 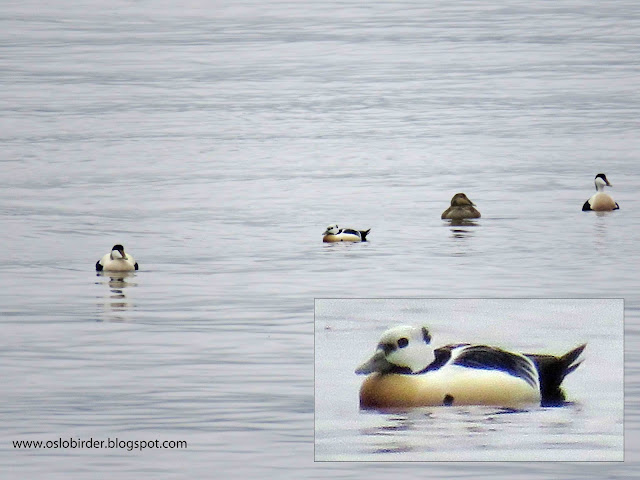