Edit: This post is about a bird I misidentified (twice). It is actually a pure Mediterranean Gull but a 2nd summer (3cy) which I explain in the next post.

I rocked up in Maridalen around 0830 to see four forlorn birders wandering aimlessly and knew that the Lark had flown. The newly sown fields it had been on yesterday had now dried out and looked a lot less attractive and had far fewer pipits on them. The farmer was active ploughing other fields so it is possible the bird has moved elsewhere within the valley but it won’t be an easy job finding it (if it is there).


The ploughing though was attracting loads of gulls which were mostly sitting a few hundred metres out on the lake and would fly back and forth from the field. Well, here was a chance to find a Med (or even a Ring-billed) Gull. There were over 300 Common Gulls which I believe are birds that will breed inland in central Norway and are waiting here for snows to melt before travelling further north. Amongst them were a few Black-headed Gulls and a couple of Lesser Black-backs.


As I scanned a group flying back from the plough I saw a bird with a jet black head and seemingly all white wings – a Med Gull and an adult to boot and therefore not the bird from Østensjøvannet. I soon relocated it on the water at a few hundred metres and it and all the other gulls were facing into the wind and looking straight at me. The head was clearly jet black with a nice red bill and white eye crescents (although there were not that obvious). Looking at the wings they sometimes appeared all white and other times there seemed to be some darkness but it completely lacked the black and white pattern showed by the 3cy Østensjøvannet bird so I was happy it was an adult and explained away the darkness by shadow due to the strong sunlight (behind the bird).


I sent out SMSs and felt pretty happy with myself – Maridalen had delivered two national rarities in two days!!


It was difficult getting good photos and I tried the superzoom and digiscoping without getting anything particularly good. Then all the gulls flew up without me seeing my gull and I went closer to the ploughed field hoping to find it there. I didn’t but the gulls returned to the water and I refound him at closer (although still from close) range. I was able to get some better photos and whilst clicking away he flapped his wings which looked all white through the view finder. As I kept watching though I started feeling uncertain. The hood whilst being jet black did not extend far enough down the nape and had the same shape as a Black-headed Gull. I thought at first this was due to the hunched up position the bird had adopted but when it extended its neck it was clear that something was very amiss. Getting more critical of myself I could see that the white eye crescents were not as large as they should be and the bill should have been even redder. But what about those wings? I viewed my pictures and had a shot with both wings open. Here I could see the right wing looking all white but the left with some black markings which also explains why from the right side on the water it looks all white winged but from the left side there is a dark smudge on the primaries.


This asymmetry was also enough to exclude the possibility of it being a 3cy pre Med Gull although clearly one in a different plumage to that at Østensjøvannet) and supports a hybrid. So my second hybrid involving a rarity this month (after the adult male Pallid x Hen Harrier). I find no reports of Med x Black-headed Gull hybrids in Norway so can even claim a first for the country?

This video has some captions explaining the relevant features (remember to choose HD if it doesn't come automatically). 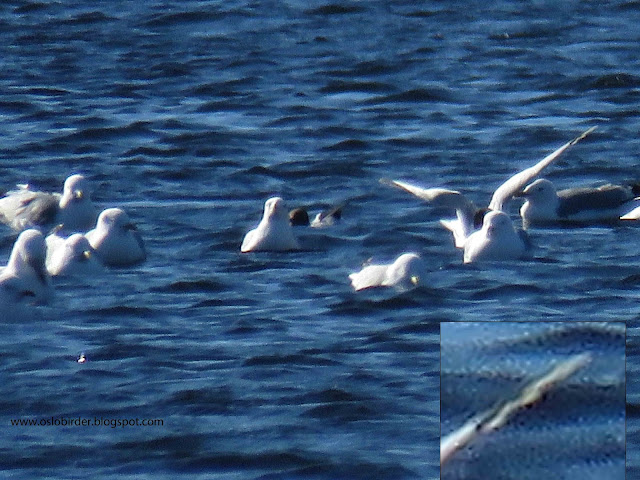