Actually not so bad at all

I've been in this game long enough to know I shouldn't be trusting weather forecasts but I was mildly p*ss'd off to find high and light cloud, sunny spells and no rain today and needless to say the rush of birds didn't occur.... Saturday and Sunday are forecast southerly winds, overcast and some showers. Instead of clearing my diary and cleaning the optics in anticipation I guess I should be stocking up on sun screen and polishing the sunglasses :-)

In Maridalen the favoured stubble field is being gradually ploughed up (looks like the farmer has a day job and just ploughs a bit every evening) and is gradually becoming less productive although in May will be good again hopefully.
The only bird of note early in the morning was a young White-tailed Eagle which is becoming an expected spring migrant here in line with the increasing population in Southern Norway. Bramblings have arrived and were making a din "singing" from the woods alongside Redwings. A pair of redpolls turned out to be Lessers. It has been a long time since I've had a redpoll of any description although yesterday I heard two. I suspected they were Lessers returning for the breeding season and todays sighting lends credence to that (Common/Mealy Redpoll breed further north or at higher elevations whereas Lesser is expanding in the south).

I decamped to Nordre Øyeren where things were equally quiet. I did have the pair of Garganey again, a Great Grey Shrike, 2 Ring Ouzels plus another Immature White-tailed Eagle and two Ospreys (so things I guess weren’t too bad). I also found a number of roost sites for Long-eared Owls but not the actual birds. Best bird though was a male Hen Harrier which I stumbled upon at very close range in almost exactly the same place as the Pallid x Hen hybrid I had last week. With the hybrid in mind the different jizz of today’s Hen was very noticeable – the wings appeared much shorter and broader and the grey colour was darker. In addition the black trailing edge to the underwing was clearly visible.


Svellet has now nearly dried out and had noticeably fewer Teal than yesterday. The water level has fallen by 25cm over the last three days and whilst this is not optimal for Teal right now it is promising with regards us having low water in the first half of May which is when the peak wader migration is.


Returning to Oslo I had a thermalling raptor which looked enormous. I stopped the car at the first opportunity and was sure I was watching a distant Golden Eagle. However it started guiding towards me and revealed itself to be a Common Buzzard but I still can’t get over how I was fooled by its size.


A return trip to Maridalen revealed no new passerines but there were some raptors: first a very distant Rough-legged Buzzard which was my first of the year, then a female Kestrel migrating westwards and then two Merlins – the first an adult male sat by the road and then later what looked to be a female again sat close to the road. So in the end the day did turn out to be fairly good!

Further signs of spring were my first frogs in Maridalen, flowering Wood Anenomies and yesterdat a Camberwell Beauty butterfly. 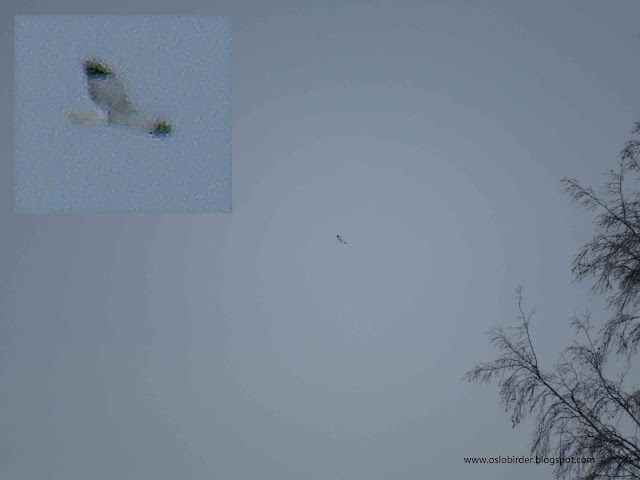 finally a very short video where you can here the intense bird song in Maridalen this morning: