Lull before the storm

I am nothing if not a man of habit and with today offering blue skies and relatively wind I headed for the Drøbak area. I searched quite diligently for the Hawk Owl but couldn’t find it and only had the northern most Great Grey Shrike. I met up with Per Buertange who was on a dolphin hunt at Drøbak. He had been there an hour and hadn’t seen Flipper but had found a Purple Sandpiper on an island which I have always checked without success for just this species. Just then a boat headed into view and I picked out Flipper riding the bow wave and I then rushed off to look at the island and year tick a very good Akershus bird. I located two Purple Sands but at a range of 1.9km they were really just a couple of small, dark waders standing on a wave washed rock. Back with Per we then enjoyed Flipper for over an hour at closer range and in better light than I have previously experienced but unfortunately he was not in a playful mood and did not jump at all.


We did witness one very interesting interaction though. I saw something jumping out of the water where Flipper was and in the scope saw that it was a Guillemot that was barrelling out of the water like a penguin. It kept doing this and Flipper would surface just behind. The bird looked seriously stressed and they covered a couple of hundred metres before Flipper moved off and the Guillemot sat and preened on the waters surface. I believe that the dolphin was playing with the Guillemot rather than truly hunting it for food but of course cannot know for sure and did not capture it digitally.

One thing that has surprised me is that despite being in the Drøbak area so often the last week and looking over towards Håøya that I have not seen the White-tailed Eagle pair that breeds here but maybe they are not yet on their breeding territory.


Tomorrow the remains of the storm that hit the East Coast of the States will hit Norway after having crossed the Northern Atlantic. This may turn up some seabirds and with luck an influx of Iceland Gulls so I will be braving the elements on a headland near you tomorrow.
This video gives an idea of how frustrating it was trying to take pictures/film Flipper today. 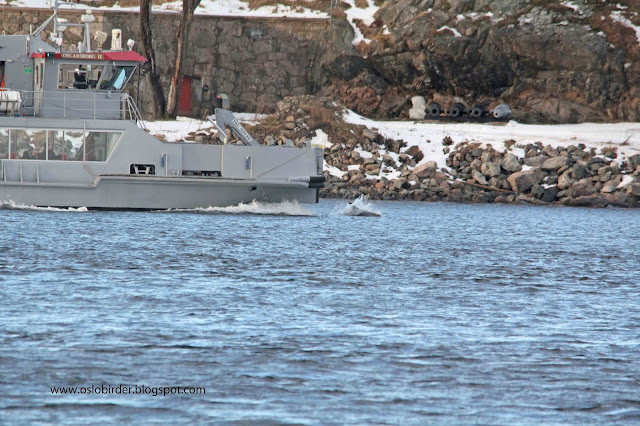