My weekly outing with Rune Z today offered the delights of eastern Akershus with a detour into Østfold.
We started with the Woodlarks near Gardermoen airport which have returned since my last visit. We witnessed a great display from two singing birds which sang above our heads and perched on fences and the ground nearby. They favour the northern boundary of the airport by the express train line where they are open sandy areas.

Then onto the Bean Goose/Bewick’s Swan site to see if I could read anymore colour rings. There were no geese or swans on the fields and on the mudbank roost in the river there were now only 42 Bean Geese (I could see none with colour rings) alongside 8 Greylags and 10 Pink-footed. The other Bean Geese and the large swan flock could have been feeding at a new site but more likely the warm weather has encouraged them to continue northwards.
Onto Aurskog Høland where we had over 40 Cranes in the valley, a Great Grey Shrike and a couple of Buzzards and a nice grazing flock of 164 Pink-footed Geese with a smaller number of Whooper Swans at Kjelle.

Driving down to Hellesjøvannet we had another couple of Buzzards and a new Great Grey Shrike. Hellesjøvannet is now ice free but not many birds have returned yet. A couple of Great Crested Grebes were early but no interesting raptors here yet. Hemnesjøvannet still had patches of ice but there were few birds here aswell although there was a scattering of Whooper Swans and geese. Best of all was an adult male Peregrine that gave great views as it first circled near the road, then perched, then went into a dashing hunting flight before departing before I managed to take a picture.
At Kallaksjøen the (Taiga) Bean Goose flock we discovered last week was still present now with 3 White-fronted Geese aswell. No other geese here though. The Great Grey Shrike was also still present here, 4 Cranes flew over and 30 feeding in a field, 3 Wigeon and 50 odd teal which were busily displaying and best of all a female Peregrine which buzzed the area. It flew right over our heads but of course I failed to get the settings on the camera right and just managed to photograph a shadow (my photoshop skill do not allow me to make it any better). 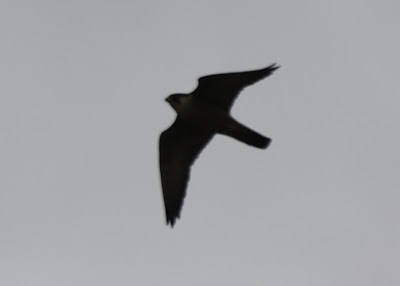 The two Peregrines we had and at least 2 of the Buzzards were I believe passage birds although I have not seen any other records suggesting there was a large raptor movement going on today.
Lagt inn av rixy kl. 21:21