A long and fairly productive day although if we measured quality bird per minute then we wouldn’t score so highly.

We started at 0530 and were back at 1730, so 12 hours in the field. Our target species group of gulls, gulls, gulls were unfortunately hard to come by today. Maybe the weather was too good (sun and little wind) such that they were happily feeding over the open ocean (we could definitely see many large gulls way out to sea) or maybe there is little food (a trawlerman we spoke to said there were far fewer birds this year than last due to there being fewer capelin (lodde in Norwegian), which is a small fish.
We did a bit better with ducks though although the rare eider, that needs help reading, escaped our attention. 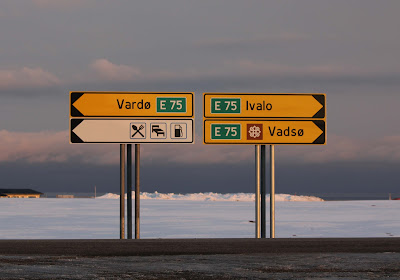 We spent the whole 12 hours between Vardø and Vadsø which is a 75km stretch and checked every single bay and harbour.
Highlights were thousands of King Eiders (we had 3 flocks of over 1000 birds, plus scattered small flocks), over 1200 Steller’s Eider (surely a significant % of the global population), 3 White-billed Divers, 23 Glaucous Gulls, many thousands of Guillemots with a few Brunnich’s (maybe 1% of the auks we saw), plus a few Puffins.
Then we had the interesting birds all of which were subspecies or hybrids:
In Vardø harbour we studied a close group of Common Eiders and had at least 5 males with “sails” plus also some females with bumps. One male was a real classic “borealis” with large sails and an orange/yellow bill. Also the frontal processes were clearly more pointed than on the normal eiders. 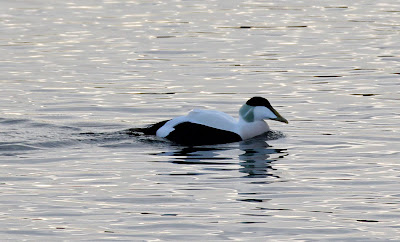 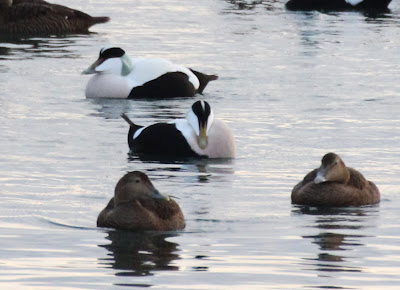 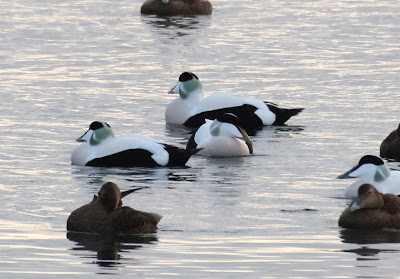 Another subspeices of interest was Common Gull. We relocated a 1st winter Common Gull we had seen in Vadsø Harbour yesterday which is a very early sighting. The bird was quite shy and had no interest in the bread we threw in its direction. The bird appeared to be large and dark (retained juvenile feathers?) with a long, pink based bill all of which point towards a Russian origin. An adult Common Gull also flew over and I managed a couple of pictures which also seem to match the Russian sub species Heinei. 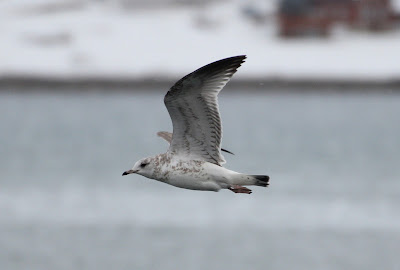 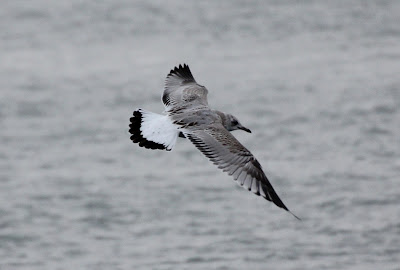 At Krampenes we had a hybrid Common x King Eider. This bird was very distinct but also surprisingly close to Common Eider when compared to images of hybrids I have seen. A hybrid was seen and photographed nearby in 2005 which was far more classic and I wonder whether the bird we saw could be the offspring of this with a Common Eider. Note that the bird we saw has a far more obvious black mask, more Common Eider like bill and lighter grey back. There was however also a single male King Eider in the flock which otherwise consisted of 200 Common Eiders.

I took many other pictures today but still failed to get any decent pictures of Steller's Eider despite us seeing so many. Steller's Eider was my dream species whilst growing up and reading accounts of exoctic places like Vardø and Vadsø so I hope I will get to take some close ups during the trip.

The Hurtigruta ship was in Vardø and made the town look far more impressive: 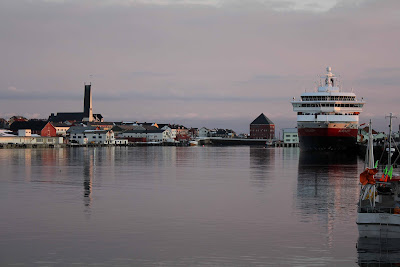 Finally, there was some unusual street art on an old building in the harbour at Vardø. I tried to retrospectively be the model: 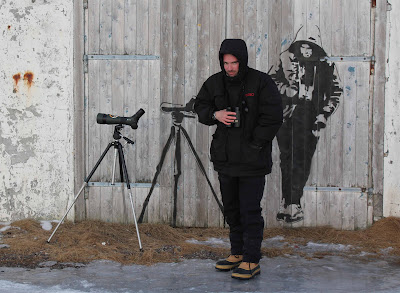