The choice facing me this morning was whether I should look to the west or to the east. I chose west and hoped to be lucky enough to refind the Green-winged Teal that was seen on Sunday at Møringa near Horten. On the drive down I had Lapwings and Skylarks over the road which just show how quickly things go in the spring. Arriving at Møringa the sea was calm and the lighting was perfect as I knew that the teal, if still present, would be distant and difficult to pick out. The first birds I noted were over 20 Oystercatchers with a couple looking like they were already preparing to nest, a couple of Ringed Plovers flying around and an early winter plumaged Black-throated Diver on the sea. There were a few Mallards but at first I didn’t see any Teal but then after 20 minutes I suddenly located a small group of Teal swimming amongst some stones and there it was: a male Green-winged Teal . The vertical white stripe was very obvious although the distance was too great to notice the differences in head pattern. I stayed enjoying the bird for over an hour although it didn’t show any better during that time.

There was some signs of passage over the fjord with 3 small groups of grey geese going north (14 birds in total), probably just Greylags although one very distant flock of 8 could have been Bean, a flock of 8 swans flying over land on the Vestfold side (over 5km distance!) appeared to contain birds of two different sizes but the distance was just too great to try to claim Bewick’s Swan (a rarity in these parts) and there were also a few Eiders heading north. A calling Reed Bunting was new for the year.
I headed down the coast towards Tønsberg and at Blixekilen had 4 Ringed Plovers and in the bay by Furustrand Camping (Vallø) I stopped to look at a collection of Gulls and there was an adult Iceland Gull – finally I found my own one this winter. It was a first sat on a stone fairly close to the shore but then flew out 500m and sat with a large flock of Common Gulls. The day was turning out to be quite good!! 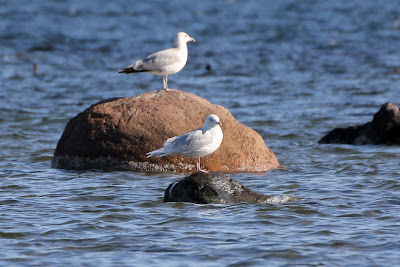 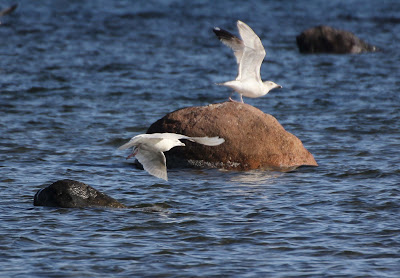 I then headed for Presterødkilen in Tønsberg and from the inner view point noted a few Lapwings, Oystercatchers, Shelduck and Black-headed Gulls a few of which were in summer plumage. Stopping at the reed bed I heard a couple of Bearded Tits and a female came very close to me giving my best ever views of the species and some decent pictures. 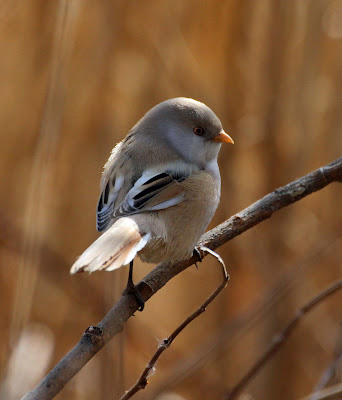 From the outer viewpoint I picked up the long-staying male Black Duck, counted 150 Tufted Ducks which unfortunately didn’t contain anything rarer and had a couple of Reed Buntings in the reed bed.
I stopped at Ilene for a few minutes hoping to pick up some migrating raptors but I didn’t see any in the short period of time I was able to stay.

It does really feel like spring now with the possibility of new birds every day.
Lagt inn av rixy kl. 21:45