Temperatures were as high as 15C today, the crocuses are out in the garden and it definitely feels like spring even if the birds are still not arriving in any numbers.
A Robin singing softly in the garden today was presumably the bird that has overwintered. I was able to take some close pictures and noted that it is a young bird (cannot say whether male or female as both sing) due to the pale tips to the greater coverts. Note how different it looks in the two pictures where in the second picture the flank feathers cover the wing such that the wing bar is not visible 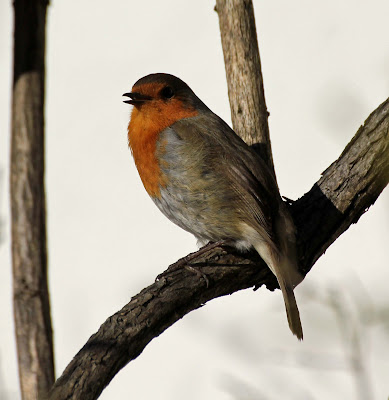 I had assumed that a bird that would choose to overwinter in Oslo, which is a high risk strategy, would be an adult bird that had some “life experience” but obviously not in this case. It will be interesting to see if Robins breed in the garden again this year although without ringing I will not be able to tell if it is the current bird that breeds I popped into Østensjøvannet where despite there being 99% ice cover there were clearly new birds in with double figures of both Canada and Greylag Geese and also 8 Mute Swans , 4 of which were sleeping on the ice presumable tired from a long flight. The Bean Goose has relocated to Østensjøvannet and is ridiculously tame. Given that it apparently arrived last autumn with a larger flock of Bean Geese it must be a wild bird but why it left the rest of the flock and eventually joined up with Mallards and Mute Swans is less easy to understand. It does serve as a reminder though that just because a duck (or goose) appears to be tame that that doesn’t necessarily mean it is an escape from captivity. 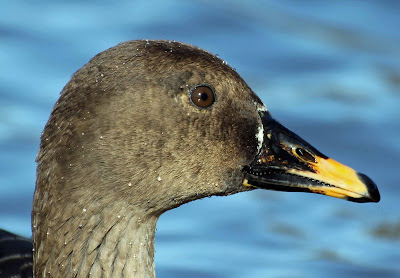 One of the two resident Barnacle Geese was clearly paired with the long staying Canada X Greylag hybrid – I daren’t think how a possible offspring of this pair will look.