I repeated Wednesday’s trip today hoping get better pictures of the Woodlarks and maybe to find some interesting ducks:  Garganey or Green-winged Teal would have been nice.
I arrived at the Woodlarks shortly after dawn so the light was not perfect for photography and I will not say that I managed better pictures but you can judge. There were 3 birds today, 2 singing and a third which i just saw on the deck.
Onto Udenes/Horgen and the Bean Geese. Two Beans and five Greylag were on the river which has risen leaving a much reduced mud bank and 17 Beans were on the fields (a group of five and a group of 12). It looks like vast majority have moved on and the remaining birds are breaking up into smaller groups before heading to their breeding grounds - is this a sign that the breeding grounds are close by? One of the southern breeding outposts in Sweden? One of the Bean Geese on the river was collar ringed but distance was too great to read the number.

In Aurskog Høland the Pink-footed Geese had moved on but I found a flock of 210 Whooper Swans - I suspect these are new birds as the flocks from a few weeks ago seemed to have moved on. Also 20 odd Cranes here and around 50 Teal which is a clear increase. In one field I had grazing Whooper Swans, Cranes and a herd (?) of 7 Roe Deer.

A Mistle Thrush was the only member of its family and still no flocks of Bramblings have arrived.
Moving on south there was little of note at Hellesjøvannet although the Whooper Swans looked like they were already making a nest.
At Hemnessjøvannet 7 summer plumaged Red-throated Divers were very early and a pleasant sight.
Kallaksjøen still held the 13 Bean geese and 30+ Cranes. The Great Grey Shrike here was very cooperative but of course as I raised my camera its lack of life told me the battery was flat. I had to be content with taking a picture with my mobile through the scope. 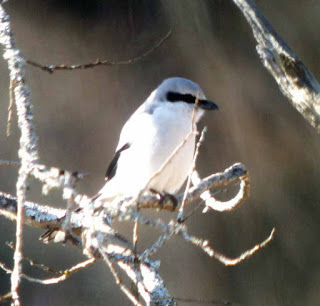 The most excitement of the day came as I checked the Teal to see if any spoke with an american accent. One sleeping bird seemed to have a vertical white stripe down the flank and I moved in closer for a better look only to find it was a blade of straw sticking up in front of the bird!
Finally a flock of 13 Twite feeding with two Linnets and 30 odd Chaffinches was a welcome addition to my year list.
Lagt inn av rixy kl. 21:47