The winds changed to the south today and whilst that did not bring any immediate changes to the birdlife in Maridalen it might mean that the rain that is forecast to start at 3am tonight might well bring down a lot of migrating birds (ever the optimist).

Three flocks of Pink-footed Geese heading north today were a clear sign of the favourable weather and are probably the final birds to make their way north from Denmark and seawatching further south in Østfold revealed Pomarine Skua and White-billed Diver which could well have also made it into Akershus if anyone had been watching.

Highlight today was my first Wryneck of the year which was a joy to see as I did not see or hear a single bird in Oslo last year. Hopefully they will bounce back this year as 2017 was a good year for them. In the Three-toed wood there was harmony with the new female seemingly having settled in and there was no sign of One-toe trying to make a comeback. Rather worryingly I checked two Goshawk nests and so no sign of incubating females which had previously been there. Both these nests failed last year so I hope there is nothing sinister happening.

There are still a lot of summer migrants to arrive with only Willow Warblers and Chiffchaffs back in good numbers although Blackcaps are building up. Only a few Pied Flycatchers are back and hopefully there major arrival will bring the return of the Red-breasted Flycatchers. 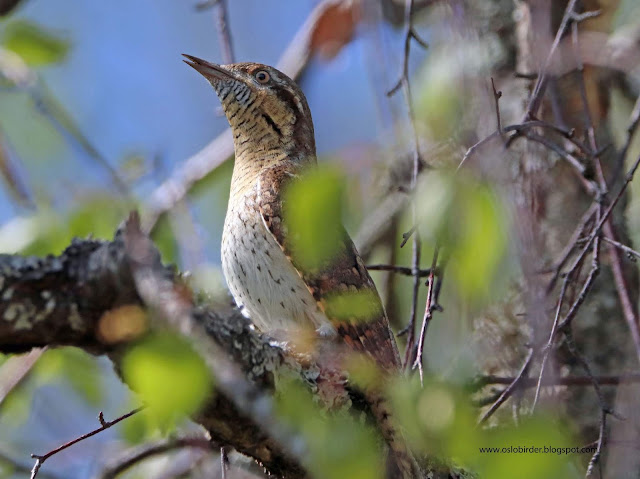