Bar-tailed Godwit in THE Dale

Keeping lists is very important for many birders although for some birders the list in itself is the be all and end all and they could just easily be plane or train spotting. What makes birding (as opposed to twitching) so different though is the unpredictability – you have no timetable or flight app to work off. You can of course have a pretty good idea of what you could expect to see and a wish list of new species that you hope to see and by looking at weather systems and calendars become quite good at predicting what will be about. But the bird gods will always have their say and sometimes days that you are certain will be super productive are all but that and then on other quiet days a real surprise happens.
And surprise was exactly what happened in Maridalen today (I see that I have started the last two sentences with “but” and “and” which breaks every rule I learnt (or is that “learned”?) at school…). When I got up into the Dale around 0830 there was nothing to suggest it would be anything but a quiet day. But a couple of Greenshank resting on a rock (water levels are still very high) and a flyover Wood Sandpiper did at least suggest there may have been some overnight movement. Then I heard a Whimbrel and picked up three birds flying over the lake towards me. Two were clearly Whimbrel but the third bird wa slightly smaller with a straight bill. I assumed first it was another Greenshank but it didn’t quiet fit and then when I could see some plumage details I realised it was a Bar-tailed Godwit! A new species for the Dale and one that definitely wasn’t in my top ten list of expected additions to the list – Dotterel was much higher up the list. The three birds flew lower and lower and looked to go down on some fields a few hundred metres away. I hurried over and there they were! A magnificent summer plumaged male Bar-tailed Godwit on a newly sewn field in Maridalen!!! The birds quickly settled down and although they were clearly aware of cars or joggers they didn’t seem too jumpy and I eventually left them to it and went searching for more surprises. Not long after though I heard one of the Whimbrel and looked up to see a male Goshawk and the three waders in the air shortly to be joined by the two Greenshank and then everything flew off.

Signs of migration were in short supply after this though and the day reverted to the quiet one I had expected. I got to check out some of the breeding birds though. There are still two pairs of Whooper Swans in the valley. One pair has clearly given up its ambitions of breeding and is now just eating grass together with Canada and Greylag Geese. The other pair though is at the traditional breeding site but has yet to start nest building (renovation) or egg laying. At Skjerven farm there are three pairs of Lapwings on eggs and there is also a fourth pair of Lapwing in the valley but they have not settled down yet and may end up not breeding. I have located a Black Woodpecker nest and the female is in the whole and presumably on eggs.

The Three-toed Woodpeckers are the real excitement at the moment and will (as promised) get their own post later in the summer. Today’s action was an intruding female which has been around since at least Sunday and seemed today to push off the old female (identifiable as the breeding female from last year due to a damaged right foot). It was fascinating watching the stand off and fighting between the two females and I imagine that very few others have witnessed such behaviour. 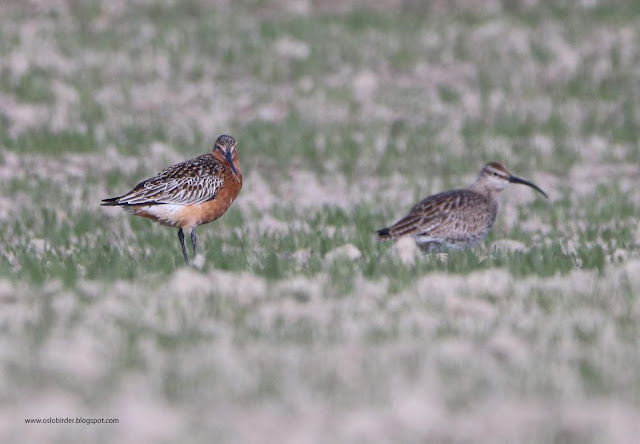