I couldn’t resist and after some child related errands found myself heading for the Beans with the hope of an increase in the flock size and some more rings to read. Well, the flock increased by 2 birds to 93 fabalis Bean and 1 Pink-foot but there was one new neck collar that I am sure I did not oversee yesterday plus I saw a coloured leg ring that was probably from the bird I didn’t manage to see yesterday. So 18 tagged birds out of a flock of 93! Today they were feeding on an adjacent field to yesterday and it felt like summer with a blazing sun although the blinding white snow on the fields reminded me it is still (late) winter.


There were a few other signs of spring today with more Skylarks, a couple of Lapwings and a migrating Buzzard. Rarest bird of the day was a 2cy White-tailed Eagle which I first picked up perched in a tree where a Herring Gull mobbing it alerted me to its presence and it then flew towards the Bean Geese and put them all up in the air. It didn’t stoop at them but looked like it was testing them out as a potential meal.


I also had a male Smew but at far too long range.


In between taking one Junior to the doctor and the other to the dentist this morning I had a quick drive round Maridalen. As I was without camera I was bound to see something interesting… I saw a bird perched on the wires and thought it would be the shrike but was actually a Great Spotted Woodpecker in a very unexpected pose. The shrike then flew up from the ground and perched on the wires 20m from the ‘pecker which then flew to the shrike and perched next to it. The shrike then went down on to the ground and the ‘pecker followed it before both birds flew off. Very interesting behaviour and I would like to know what the ‘pecker was doing as it didn’t seem to be mobbing the shrike, just interested it. I also had my first Starling on the year for Oslo and Maridalen.


I saw my first butterfly of the year today with four sightings of small tortoiseshells (neslesomerfugl) and there was a spate of other sighting with today clearly being the first day of the year with any significant numbers. 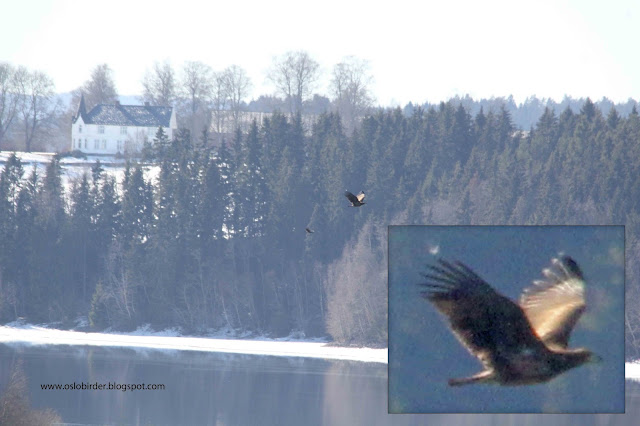 This video shows the eagle being mobbed by Herring Gulls and on the sandbank: