It is not just migrant birds that appear in the spring, hibernating birders also make their first appearance and this morning I managed to get Per Christian out for a pre-breakfast Maridalen trip. Already as I went out to the car just before 7am I heard the drumming Lesser Spotted Woodpecker which I hoped would be a good omen as my aim for today was to find drumming Three-toed Woodpeckers.


That unfortunately was not to be and although Great Spotted and Green Woodpeckers were active around the farmland in the valley there was very little ‘pecker activity in the forest with just a couple of Great Spotted Woodpeckers and a calling Black. It is clearly still too cold and wintery in the forests and will be a week or so before the forest breeding ‘peckers get going. Common Crossbills are still everywhere although I have yet to locate a nest. A group of agitated Crossbills with some Siskins and a couple of Yellowhammers alerted us to a roosting owl high up in a spruce tree. I hoped it would be a Tengmalm’s but we had to make do with a Tawny Owl who seemed happy to sit out the annoyed passerines and try to sleep.


The Great Grey Shrike was singing although it won’t win any prizes for the quality of its song. There were only two signs of migration but both were very god to see. The first was a bit of a surprise due to the early date with a flock of ca.100 Pink-footed Geese heading north. They were also early in the day (08:41) meaning they hadn’t left Denmark this morning but had probably spent the night somewhere in southern Sweden or Norway. The second sign was four Lapwings on their breeding field. All looked to be males and were sat away from each other as though they were already marking out territories.


A family bike ride in the afternoon took us to Frognerparken where there were many calling Black-headed Gulls making it really feel like spring but no Lesser Black-backed Gulls yet. 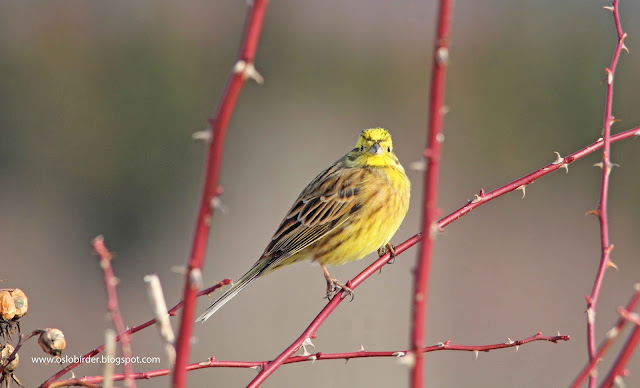