I received an SMS from Larry Griffin of the WWT this morning excitedly informing me that one of the GPS collared birds had just phoned in and was on its way to Norway from Denmark. It will be interesting to see what he does given that I think there is still loads of snow on the fields in the favoured area. Will he just turn around and head back to Denmark as a bird did in 2013? Will he find a stubble field where it is possible to find food or will he stick to the river and find food along the edge of the river whilst waiting for the snow to melt?
There are three birds with working transmitters and all are in the same family so would be expected to travel together. They are on different time cycles to phone home so it took a bit of time before all had phoned in and we could see more of the family was on the way and see the route they had chosen. They left Denmark after 6am GMT and were already on the Glomma River by 3pm GMT. The map shows the received positions of the two of the collars and it is reasonable to assume that the black collar followed the yellow route so they don't fly in a dead straight line but correct themselves along the way which can also be seen with the crooked route they took when they arrived over the Oslo area. 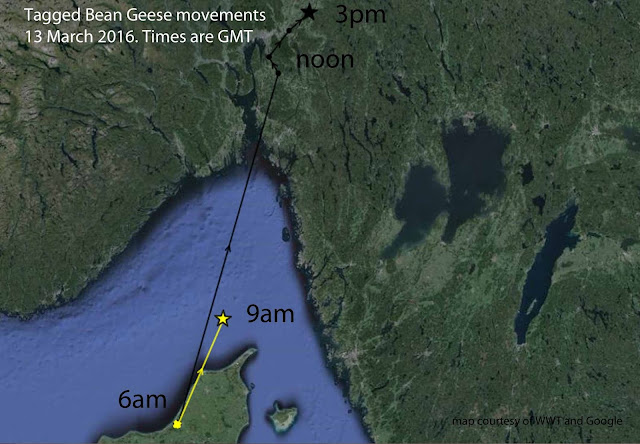 Wonder what I'll be chasing tomorrow?

The arrival date in Akershus of these geese is clearly temperature/weather related and can vary by up to 4 weeks. In 2013 a tagged bird flew north from Denmark on 28 March before turning round and flying all the way back to Denmark before coming back for good on 4 April. In 2014 they arrived (and stayed) on 8 March. In 2015 we didn't have any working transmitters but the first record was 9 March and in 2012 20 March.
Lagt inn av rixy kl. 17:57