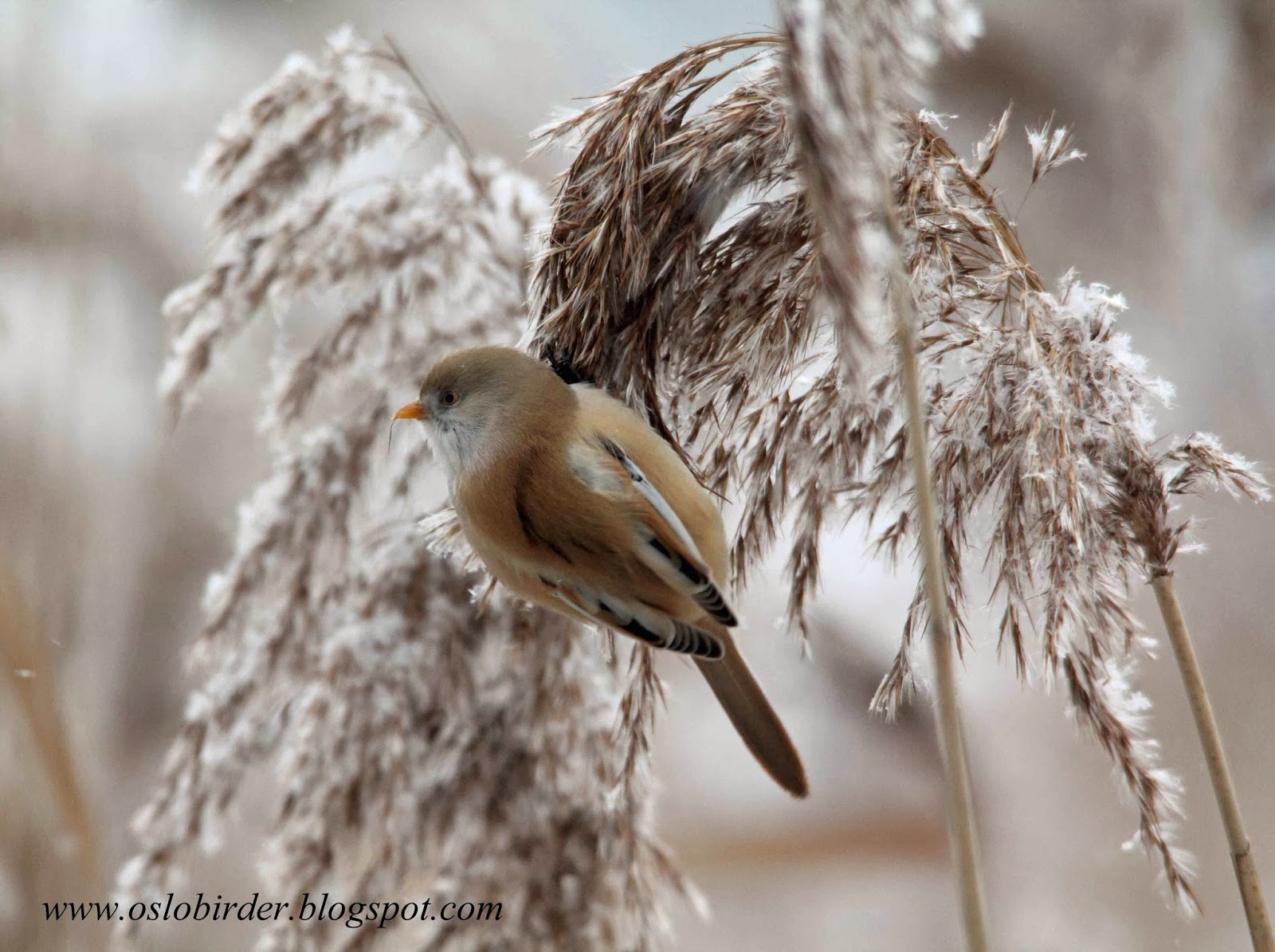 Snow was falling all morning today but it is very dry airy snow so the depth of snow on the ground is not that much.

I was not confident of seeing much but gave Maridalen and Fornebu a try. Maridalen was very quiet except for a large flock of 26 Bullfinches (dompap) in a tree top close to a garden where there is a feeding station.

At Fornebu there were no small finches to grill but the Bearded Tits (skjeggmeis) were incredibly cooperative. I stopped at the same place where I saw them a couple of days ago and they were feeding in almost exactly the same reeds. Nearly completely silent as usual it was a bit of luck that I saw them although they did feed often in the tops of the reeds making them fairly visible. I watched them for close to an hour and a half and not once did they fly over the reeds or give calls that would have been audible over 30 metres away (and frequently less than 10m). During the whole period of time they kept with an area of reeds no more than 25  and fed nearly constantly. As I have mentioned before, when they arrived in the late autumn they called a lot and loudly, and responded to playback. Now they are calling infrequently, quietly, and do not respond to playback. When they first arrived they were presumably keen to find out if there were any of their kin here, food was perhaps plentiful and they were unsure as to whether they were going to stay here or disperse further hence they were noisy and inquisitive. Now they are here for the winter, have sussed out it is only the six of them, and they need to conserve energy in the cold. Their calling is just for communication within their small group. When they did call it was often when they dropped down to the base of the reeds where they were rooting around and seemingly drinking. In this respect they are identical to the Two-barred Crossbill flock which was also nearly silent until they were about to fly down to eat snow (drink).
The flock consists of three males and three females although it is not clear whether th
ey are three pairs. Only one of the females is ringed and one, possibly two, of the males. The ringer of the Bearded Tits at Øra reckons he ringed ca.90% of the birds there so even though this would be the most likely source of the Fornebu birds the fact that only a quarter (possibly a third) of the birds here are ringed suggests a more distant origin.

At home a flock of 30 Waxwing (sidensvans) flew over and the Robin and partially leucistic Fieldfare were still present.

I fired off close to 400 pictures of the Beardies and have spent quite a lot of time deleting the vast majority. Choosing the best ones was also not easy. The light was poor and the fastest ISO I was able to use was 1600.