At home my youngest told me there was a baby bird sleeping in the bird table. With a dollop of scepticism I checked it out and found a dead Blue Tit (blåmeis). The bird was perfectly preserved but given the freezing temperatures could well have been there a while. It is very unusual to find a dead bird unless it has flown into a window or been taken by a predator. The plumage of this bird looked in good condition but there was not much fat on it. It weighed 9grams which according to BWP is right at the bottom end. As there is a good supply of food here I assume that maybe the bird just perished due to old age and the cold?  The girls wanted to have it as a pet which is I think a bit morbid! But I have other plans for it – bait to lure Hawkie into the perfect picture. The girls didn’t think much of this idea so at the moment it is in the freezer with its fate undecided. 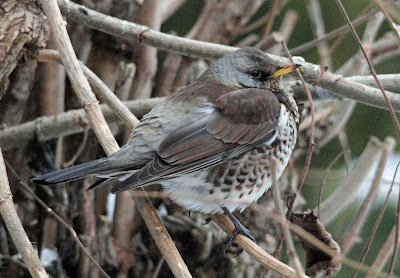 Earlier today I was in town and saw the adult Peregrine perching on top of a church (its second favourite perch after the Plaza hotel where it was perched on Friday. On the church it is much lower down and in a sort of photo distance. It was having a good preen whilst I watched it. Based on size this bird is an adult male which is what I also judged yesterday’s birds to be although I note that others are recording a large adult female in the city.