A shot of Hawkie please

Hawk Owl is back on the streets and this latest batch is of exceptional quality. I went looking for my dealer again today and as usual he was hanging around a street light showing off his wares.

I awoke this morning to 5cm of new snow and mist which was not how I had interpreted yesterday’s weather forecast. I needed my fix though so I still went looking for the two Hawk Owls (haukugle) reported yesterday. I found the first one incredibly easily sat on top of lamppost over the road close to Kroer. I admired him for a bit in mist and then went looking for the other one hoping there would be better light there. The mist was even worse at the second location and I couldn’t see more than 200m and was unable to find the bird. I did make out a Great Grey Shrike (varsler) in the murk though. Returning to number one the mist had possibly lifted slightly and he was sitting in exactly the same spot. As usual with these birds he was completely unfazed as I stood no more than 10 metres from him. After a few minutes he clearly heard a possible prey item and started looking intently over his shoulder at the verge on the other side of the road. I decided to take some steps back, zoom the camera out and increase the shutter speed to 1/1000 so I had a chance of catching some possible hunting action. After a few minutes he seemed to lose interest and I needed to put my gloves on. Inevitably as I did so he flew down and caught a shrew literally right by the side of the road. I managed some pictures after the act but he then quickly flew off to eat in peace. Clearly I don't yet have all the skills yet to take successful action shots although on the upside the resulting pictures are better than my previous attempts.

A garden close by had a large mixed flock of Greenfinches and Tree Sparrows with three Chaffinches and two Bramblings mixed in.

Whilst waiting for the mist to lift I went to Drøbak hoping for a couple of easy year ticks. The Carrion Crow came after I threw some bread out but I failed to find myself a Little Grebe.

Driving back to Oslo I had a look around Maridalen and whilst I tried to find myself some grosbeaks I thought I would check the latest sightings on my phone and saw that a Glaucous Gull (polarmåke) had just been seen 25 minutes away in Sandvika. Well it wasn’t yet 2pm so I had plenty of time (and the grosbeaks will give themselves up another day). The gull was reported as being by the car park of a supermarket which backs on to a river. There were a few Herring Gulls (gråmåke) hanging around when I arrived but nothing paler (not even a potential hybrid). There is an easy solution to these problems: go in the shop and buy the cheapest loaf of bread they have and then throw it out. The white-winged wonder (or more precisely cream-coloured) appeared immediately and was not backwards in coming forward. This was a particularly large bird so was most likely a male and was dominant over the Herring Gulls. It came to within a couple of metres and even at 150mm I could not get the whole bird in shot, at 500mm I could just get the head. With this level of tameness, how long before it is brandishing a shiny ring?
As always it was a great bird to see and will hopefully hang around to brighten up the short, dark winter days.
I was even able to take an acceptable video with the iphone. 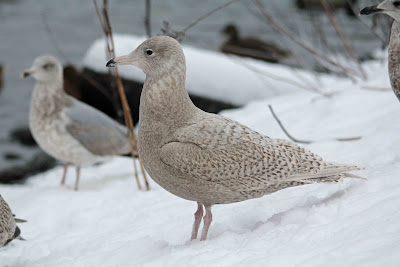 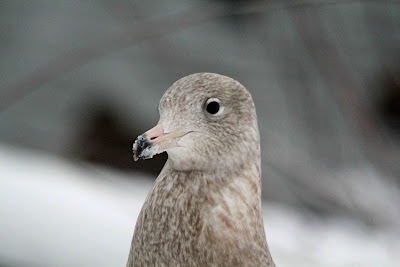