No guesses what I needed today. I had lots of dealers to chose between today with 5 reported offering their wares at the weekend. I tried first the three reported close to each other in Østfold but I couldn't find any - I was starting to notice that empty feeling in my stomach and was beginning to get the shakes. I needed some action soon. Back into Akershus I tried for the one at Kroer but only scored a Great Grey Shrike (varsler) which was my third of the day. This type of little pick-me-up is all well and good but the high doesn't compare to what I was looking for.


With desperation setting in I set course for Frogn knowing that the dealer here would be hanging out by the school. On the way though I spied a dealer at Furu. This one has provided me low grade product on two occasions before but had been absent for over a week. Today though he was a bit shy but eventually I got a hit of high grade Hawkie. He even, after some encouragement, called a couple of times. With a feeling of euphoria settling over my body I took a drive-by hit of the school dealer who seemed barely interested in offering his wares.
In Maridalen a flock of 22 Bullfinches at one of the feeding stations was a multi coloured psychedelic end to my trip. 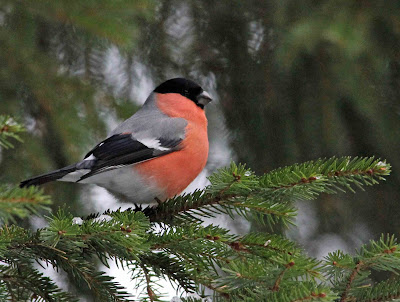