Enigmatic is a word that I own in my vocabulary (if I remember correctly it came into my possession in 1998) but it is saved for very special occasions. Today I have taken that word out, given it a good polish and am ready to use it again.
With sunny weather and a few minus degrees forecast for today I decided to walk around Maridalen. As my walks through the forest often produce very little whereas when I drive I find all manner of good things I decided on a circular walk on the minor roads. It all started a bit slowly and at the pork feeding station a film crew had taken over the whole area so there were no birds to see here. I stopped frequently to listen and had my eyes peeled but there were no large finches to be seen (not even Bullfinches). After two and a half hours when I was nearly back to the car (sound familiar) I heard a Bullfinch (dompap) and then 100 metres ahead of me a large finch flew over the road.  No alarm bells rang at this stage but when two more birds flew over I knew that I was in luck. Six Pine Grosbeaks (konglebit) flew over the road from one spruce tree to another. I positioned myself by the tree and looked and listened. It took a while to see even a single bird in the dense tree but eventually I was able to see a few birds. They were incredibly quiet and if I hadn’t seen them in flight I could have walked past without noticing them.  I watched them in the same tree from 11.48 until 12.13 – a total of 25 minutes in one tree. It was clear that there were more than the six birds I had seen fly in and I estimated there to be 12. When they finally flew out (after having given the “we are about to move on” whistle) a total of 25 flew out. How can such a large colourful bird remain hidden in the same tree for 25 minutes and then suddenly fly out to reveal a flock of 25 birds?
Pine Grosbeak must qualify to have the adjective enigmatic placed before it! THE ENIGMATIC PINE GROSBEAK is without doubt one of my favourite birds and I can’t get enough of them. They have now been present in Maridalen since 29 October and this is the 10th time I have seen them. They are not easy to find but do reward perseverance.
I fired off about 230 pictures in reasonable light but they were always in the top third of the tree so never came that close and very few pictures were any good. Also I only saw one red male although I must admit to finding the orange young males to be even smarter. 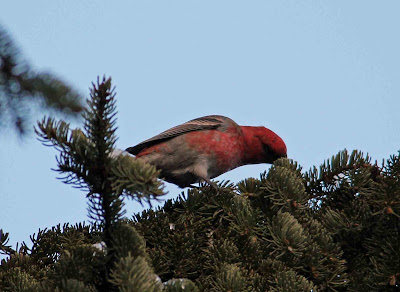 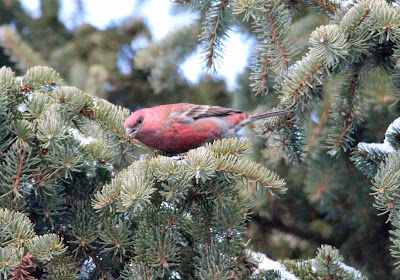 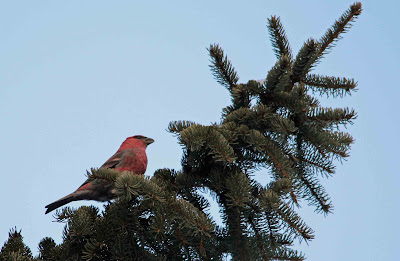 Later in the day I tried to find if there were any Med Gulls at Marienlyst (where a bird overwintered last winter). I threw out bread and 80 Common Gulls (fiskemåke) gathered over me but they were very wary and none came down to take the bread whilst I was there. I think they only trust old ladies and believe that men with binoculars are likely to try to put a ring around their leg. Oslo’s Collared Doves (tyrkerdue) were present at their regular wintering locality with 19 birds counted. This species is becoming very scarce in Norway now and the food they find in this park in the winter is probably what keeps them going in Oslo.
At Bygdøy a couple of Long-tailed Ducks (havelle) on the sea were a very good Oslo bird but no grebes, divers or white-winged gulls to find.

At least 5 Hawk Owls were seen in Akershus, close to Oslo, today (three being previously reported birds) so the invasion is far from over. After a few days of fog today clear skies and sunshine presumably prompted a lot of sitting exposed and soaking up the rays.
Lagt inn av rixy kl. 17:31